If anybody knows where the bones are buried and what skeletons hang in whose closets in Atlanta, it’s attorney Randall Kessler. His client list reads as if it was torn straight from the pages of Us Weekly or Sports lllustrated; Tameka Foster Raymond, wife of singer Usher; rapper Juvenile, Bishop Thomas Weeks III and Lance Briggs of the Chicago Bears. When famous people want to call a marriage quits, battle a paternity suit, or get child support from an absent parent, Kessler is the man they call. Best known as a celebrity divorce attorney, Kessler was recently named vice-chairman of the family law section of the American Bar Association. Here Kessler, 46, recently married himself, talks about marriage, trust and why prenuptial agreements are so unromantic.

Q: How does someone who starts out pursuing a degree in international law, who dreams of one day working at the Hague, wind up a celebrity divorce lawyer?
A: I thought I’d be an international lawyer but there are only so many jobs at the United Nations. So I clerked at a firm that did a lot of family law and I ended up going out on my own three years out of law school [at age 29]. I took anything that came in the door. And it turned into people sending me family law because I was good at it. Back then, lawyers didn’t really like doing divorce work … it’s messy. Fortunate for me, I liked the work and enjoyed it.

Q: What is it about it you like, because divorce cases, particularly the high-profile cases you handle, are so messy.
A: Nobody comes out [of the courtroom] after a divorce and gives me a high five and says, ‘That was a great divorce, get me another one.’ Divorcing people are typically normal people going through hard times … rich or poor, whatever your background is. And I have the ability to help them. I hate to say it’s a feeling of power because that sounds like I’m a power monger and I’m not, but it’s an empowering feeling.

Q: So when you were a kid, did your parents get a divorce?
A: Sure. My folks got divorced and they’re both happily remarried. They divorced when I was 18. But still it hurt me and it hurt my family and it was tough to go through. My stepmother happens to be a very well respected divorce lawyer in New Orleans. And it’s been nice to have that resource to be able to talk about cases. 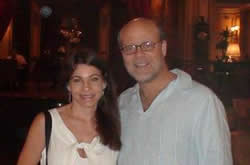 Divorce attorney Randall Kessler with his wife Valerie Kessler. Though he encourages clients to get prenups, he doesn’t have one.

Q: What was your first really big case that put you on the map?
A: We represented the mother of [R&B singer] Keith Sweat’s two children.

Q: Lisa Wu Hartwell from “The Real Housewives of Atlanta?”
A: No [not her]. But that was interesting and exciting. And Eddie Johnson, the Atlanta Hawks all-star; we represented his former wife and collected about $400,000 in past due child support. It took 10 years to do. It’s more exciting to collect the money when you know it’s there. A lot of people are owed a lot of money but you’ll never collect it. You take their driver’s license or you go after them and you garnish their wages and get $50 a month. But with him, we knew sooner or later we’d get the money because the NBA had held onto it. And another one of the early ones [client] was the mother of [former Atlanta Falcon] Andre Rison’s children. She’s one of my favorite people. No one even knew we represented her. No one even knew there w 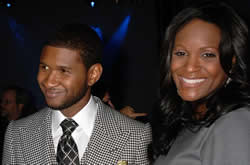 as a case. She was more patient than anyone. All the other women who had had kids with him were suing him. She was patient. That took maybe 10 years. The sad thing is, the kids were already

18 and 19 by the time we got her the money. … But 95 percent of my cases with athletes would go away if the parties would agree on parenting. The women [mothers], very rarely is it about

money. It’s about ‘I want him to be involved.’ If he would be involved, there wouldn’t even be a lawsuit.

Q: Which do you prefer, low-profile or high-profile cases?
A: I prefer appreciative clients.

Q: What does that mean?
A: It doesn’t matter if they’re high-profile or low-profile, a client that recognizes that we’ve got a value and we’re helping them achieve a goal. What I don’t like are clients that are out there for vengeance.

Q: How hard is it to represent a high-profile person because you’ve probably got to get through personal assistants, stylists, agents?
A: There are layers and that can be hard sometimes, winning their trust. High-profile people are suspicious by nature, they have to be. Athletes that make it big, all of a sudden their friends come out of the woodwork, everyone wants to borrow $100,000 to open a barbershop.

Q: You’re pretty good at managing client image in the media, but how have things changed for you now that everyone is telling all on Twitter and Facebook?
A: It’s a tough one. That’s a whole big area. We warn our clients it’s not just what they say, it’s what their friends say. Their friend might put on their Facebook account, ‘Hey, my friend, she’s out with so-and-so.’ Well guess what, your friend’s husband’s lawyer just read that posting. It’s a gold mine for lawyers.

Q: Why do you think we’re so fascinated by, obsessed by really, celebrities?
A: Everyone compares themselves to somebody and for good or for bad in America a lot of our role models are entertainers and athletes. It’s a way to sort of look at ourselves by the way they’re treated.

Q: Famous or not, should people get prenuptial agreements?
A: Prenups are an insurance policy to keep people from having to pay lawyers a lot of money to go to court. Generally, I think they’re a good idea. But I don’t think they’re for everybody. Only if there’s something to protect. Some people think it’s so unromantic.

Q: You’re not following your own advice.
A: I know. I’m the shoemaker’s daughter, right? (Laughs) My wife and I, God forbid that ever happen — I trust her implicitly — that it would not be a fight about money.

Q: From all the cases you’ve handled, what’s the most important lesson you’ve learned about keeping a marriage healthy?
A: Take it seriously. If someone raises the divorce word, take it seriously. It’s a cry for help. I hate when I see that someone could have fixed their marriage had they taken it seriously early on