Amid sand and Kevlar, judge is far from bench 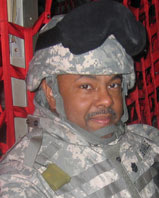 “Our food over here, as much as it’s very healthy, is kind of light on the seasoning,” said Glanville by telephone from his billet in Kuwait. “I miss a lot of seasoned food.”

The judge—or Lt. Col. Glanville, U.S. Army Reserve, as he is more properly known these days—shipped out in late January to serve as staff judge advocate assigned to the 335th Theater Signal Command, based in East Point.

On his first assignment to the Persian Gulf, the former Fulton magistrate who was elected Superior Court judge in 2004, said he performs a range of duties, from counseling commanders on the legal ramifications of military operations to consulting with soldiers who may be struggling with family or financial problems back home.

“There is no typical day,” said Glanville, who oversees a staff of lawyers. “You kind of do what the mission dictates; that might include giving out all types of advice on any number of issues related to personnel, military justice, contracting, counter-insurgency operations—any number of things a commander may have need of. We give the full range of legal services.”

Glanville said he handles “a little bit” of criminal work, “but my command primarily does a lot of commercialization, so I answer a lot of fiscal law [questions] and do a lot of coordination with other staff sections to make sure that our projects are properly funded and planned and executed. It’s a lot different an experience for me.”

In some ways, said the 44-year-old jurist, his work is similar to that of a general-practice attorney in the States.

“Both the military and civilian systems have one goal: to provide due process to the individual,” he said. “How they go about doing that is where the differences lie, and the military has a totally separate way of handling issues of criminality and administrative processes, as well.”

His judicial experience, he said, seldom comes into play.

“I don’t do any judging,” he said. “In the military, we have a separate branch of folks that do that, a detail of military judges. I’m a staff judge advocate, so I’m the chief lawyer for our signal company command.”

While he spends most of his days at Camp Arifjan, a sprawling base south of Kuwait City, Glanville said his duties sometimes require him to gear up for forays off-base or to sites in combat zones.

“I do have to go out on missions, and put on my equipment like any other soldier: my [individual body armor]–that’s the stuff that has the armor plates inside it—and my Kevlar and other equipment,” he said. “I’ve been to Afghanistan already, so you need that to fly over there.”

His spice cravings aside, the base offers some comforts of home, said Glanville.

“We have pool tables, pingpong, computers and a phone center where you can make morale calls,” he said. “And we have Starbucks, a KFC, and a food court with Pizza Hut and Robin Hood sandwiches—a lot of the same stuff you’d expect back stateside.”

He tries to stay in contact with his wife, Lisa, a program manager for the Fulton County Juvenile Courts, and his children, 15-year-old Evan and 12-year-old Leslie, as much as possible, said Glanville.

“With my being gone, she’s very, very busy. Evan plays golf, and my daughter sings and acts, so she’s always running.”

“From a physical perspective, at the end of the day I’m exhausted,” she said. “But from an emotional perspective, I’m exhilarated that he’s able to do what he’s doing. And the children are so proud of their father.”

They particularly look forward to the phone calls from Kuwait, she said, which come at least twice a week.

Lisa Glanville, who has worked with the juvenile courts for a year and a half, formerly worked as a grant administrator with the Ryan White Program for HIV-positive children, and now spends her days overseeing programs aimed at drug treatment and intervention for children at risk of criminal behavior.

Then she takes up her parenting duties.

“I’ll say one thing,” she said, “my hat’s off to those single parents who are able to do this all the time.”

In addition to the strain on his family, Glanville also worried about his colleagues at the courthouse.

Upon receiving his new assignment, he said, “I was torn, because I certainly love the opportunity to serve in this capacity, but my colleagues had to pick up the slack, and a lot of my cases were redistributed. I just wanted a smooth transition in the court’s service.”

Not to worry, said Judge Christopher S. Brasher, who picked up some of Glanville’s civil cases upon his departure.

“Lots of folks on this bench (and Judge Henry Newkirk on the State Court Bench, as well) have tried to do our small part to keep the court’s business—and those cases assigned to Judge Glanville—moving, while he is in Kuwait serving our country,” wrote Brasher in an e-mail.

The rest of Glanville’s caseload was divided among Senior Judge Alice D. Bonner and Judge Stephanie B. Manis, according to Court Administrator Judith Cramer. The judges don’t view the additional cases as a burden, said Brasher.

“What a small price for us to pay, while he and his family pay a much larger one,” he said.

Glanville said he also seeks input from local lawyers as he works to assist his fellow soldiers.

Family law specialist Randy M. Kessler said he is among those Glanville has called upon, and considers it a privilege to help out.

“He has called me from Kuwait to help keep various family law disputes from too negatively affecting the lives of men and women while they are serving our country overseas, while at the same time trying to ensure that the families back home are cared for,” said Kessler, who characterizes Glanville as “one of the most genuine, honest and caring individuals I know.”

Glanville, who is due back the second week in May, said he has heard about the pollen blanket that recently afflicted Atlanta, and is not sorry to have missed it.

“On the other hand,” he said, “I have sand that blows all the time, and whenever that blows up, we’re all told to stay inside, so it’s probably the same effect.”

In any event, he said, he is eager to get back to “my family and friends and colleagues, and the city I love so much. But I’m happy to serve; there are worse places to be, and the service of one’s country is very important.”