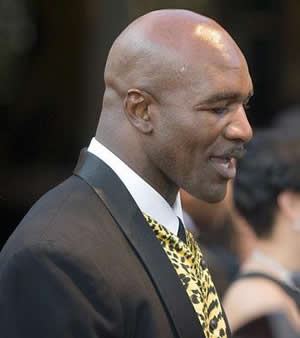 Former heavyweight boxing champion Evander Holyfield is scheduled to appear in court later this month to answer an attorney’s claims that Holyfield has not complied with his financial responsibilities to a woman and the child she had with him.

Randy Kessler, the attorney for Toi Irvin of Clayton County, said Monday that he is prepared to ask for jail time when Holyfield appears in Fayette County Superior Court on Oct. 22 to answer why he has failed to comply with the support agreement for the couple’s soon-to-be 11-year-old son, one of his 11 children.

Kessler said Holyfield had until Sept. 1 to pay the $4,500 in legal fees that Kessler’s firm ran up in getting him to pay back child support and to ensure that a college trust fund is in place and funded. Neither condition had been met as of Monday afternoon. Holyfield has also failed to pay the child’s private school tuition, forcing the mother to instead send her son to public school, Kessler said.

Kessler said he intended to ask the court to make Holyfield comply with the terms or risk going to jail.

Holyfield, who lives in a sprawling mansion in Fayette County, is obligated to provide $3,000 per month in child support. Court records show that he’d been in arrears before making a $9,000 payment in July. In avoiding a scheduled deposition, he also agreed to a court order requiring him to make timely child-support payments, reinstate the boy’s health insurance, cover a private school bill and ensure that a college trust fund was in place.

“It’s been frustrating,” he said, “because she’s getting such a low amount [in child support], considering the amount of assets he has.”

Efforts to reach Holyfield Monday afternoon were unsuccessful as no one answered the phone at his office.

His attorney, Joy Edwards, didn’t want to comment on pending litigation, but hinted at a remedy agreeable to all parties prior to the court date.

“I think Evander, historically, has made his best attempts financially to take care of his children,” she said, “and he will continue to do that.”

Holyfield has grossed more than $248 million over his career in ring purses, including $107 million over a six-fight stretch from 1996-99. He’s been hit hard, however, by two previous divorces, several failed business ventures and child-support payments believed to run as high as $500,000 annually for the nine of his 11 children that don’t live with him. Holyfield and his third wife, Candi, have two children between them.

There were reports recently that Holyfield would fight Russian Nikolai Valuev for the World Boxing Association title in December, but no formal agreement has been finalized as of yet. Should he fight Valuev and win, Holyfield would become the oldest heavyweight boxing champion ever at age