Bishop Weeks looking for a new wife after Bynum

The recent ex-hubby of national evangelist Juanita Bynum is looking for love again — this time on his own reality show. 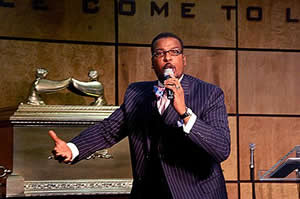 He is seeking advice from his followers.

Weeks will document his effort to open his heart to love again in 10 streaming video “Webisodes” starting next Tuesday on his Web site www.bishopweeks.com. The idea came after Weeks was flooded with thousands of e-mails and letters from people offering advice about what to look for in his third wife. Some even offered to be his wife.

“There are some very adamant women,” says Weeks’ associate, Minister Guy Reeves of Global Destiny. “A lady from Belgium flew all the way here to meet him. She came to the campus. She wanted to be the next Mrs. Weeks like many others who have approached me about their strong desire to be Bishop Weeks’ wife.”

Weeks says he is opening his life to his followers so they can get a Christian perspective on dating and coping with the desire for intimacy.

“What kind of advice would you give me about the new Mrs. Weeks?” he asks on a Web site promo of the episode.

“We will probably find in due time who is that perfect woman for me,” Weeks says. “This time I’m not going to limit it just to the local church … It’s a global ministry. We’ve got to have a global search.”

Weeks is still serving probation for an August 2007 attack on Bynum outside an Atlanta area hotel. He was charged with aggravated assault as a first offender and has completed the required community service hours and anger management counseling.

Weeks says he hopes to wed again someday. His Webisodes won’t be an open call for a wife like typical reality dating shows. But if women send love letters — they will likely be shared. As for his standards, Weeks says the next Mrs. Weeks “can’t be ugly. She has to be easy on the eyes.”

While Weeks keeps his love life in the public eye, his divorce lawyer says he is not getting the payments he is supposed to from Bynum.

The lawyer, Randy Kessler, said Friday the evangelist is behind in payments on a settlement agreement ending her union with Weeks, under which she agreed to pay $10,000 a month for four months to cover attorney fees when the couple divorced in June.

Kessler said Bynum still has not transferred the title to the couple’s 2004 Land Rover to Weeks or made final arrangements to pick up antiques she wanted from the house.

Bynum’s Waycross compound, where she runs her international ministry, was recently facing foreclosure and a delinquent tax sale at the same time, according to Ware County Tax Commissioner Steve Barnard.

The tax sale was advertised in a Ware County newspaper for a week. Then, the Evangelical Christian Credit Union, the property’s finance company, stepped forward to absorb the bill on Bynum’s home and headquarters.

The foreclosure also is being advertised in the Waycross Journal-Herald. Bynum’s 2007 original tax bill was $31,863.39, but it accrued interest and penalties for non-payment since last November.

A spokesperson for Bynum, Amy Malone, said she had no comment on either Weeks’ Web reality show or Bynum’s financial situation.