‘My emotions got the best of me,’ he says 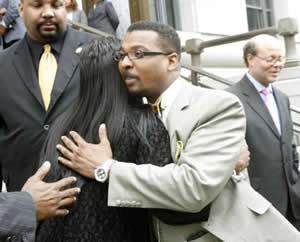 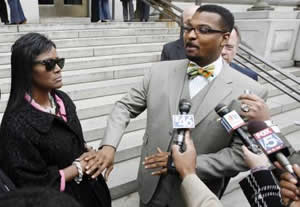 In Fulton County Superior Court before judge T. Jackson Bedford, Weeks admitted that he grabbed Bynum, threw her down and kicked her in the parking of the Renaissance Concourse Hotel, near Hartsfield-Jackson International Airport on Aug. 21

Weeks immediately was sentenced to three years probation, 200 hours of non-church related community service and ordered to attend anger management counseling. If he successfully completes these conditions, the conviction will be expunged from his record.

The contrite pastor apologized to Bynum.

“I want to apologize to my wife for all actions you had to go through,” Weeks said. “I know it has been difficult. I appreciate you and I thank you.”

When asked by Bedford if she approved of the deal Weeks struck, Bynum said yes.

Still, Bedford scolded both ministers for their recent behavior as their marital troubles played out before the public.

“I understand if not hundreds of thousands, millions of people look to you for leadership, both moral and spiritual,” said Bedford to both Bynum and Weeks. “Going forward I would be mindful in your conduct in the future. Going through a divorce is a very difficult time. I know what it does to people.

“I’m very pleased this would was able to be worked out. Neither of you needed to be exposed to what would have happened in the courtroom. I wish you the very best,” Bedford said.

After the hearing Weeks and Bynum stood together outside the courthouse, expressing at least a degree of love.

He had asked for forgiveness and she accepted.

“My emotions got the best of me,” Weeks said of the Aug. 21 incident. “I take responsibility.”

Bynum said seeing her husband on Monday at a divorce deposition brought back old memories. She intervened on his behalf appealing to the court to be lenient on him.

“When I saw him it allowed me to reflect on the first time we got married,” she said. “No one tells you what to do with all of the love you feel for the person.”

District attorney Paul Howard said he was pleased the case could be resolved without going to trial. “He took responsibility,” Howard said. “We thought that was important.”

Weeks would not say whether the couple was getting back together.

“God is in control of all things, ” he said.

Weeks said he learned a lesson from this ordeal. He urged men facing similar conflicts with their spouses to “walk away, still walk away.”