“She Wanted To Be the Next Oprah at Any Cost,” he notes 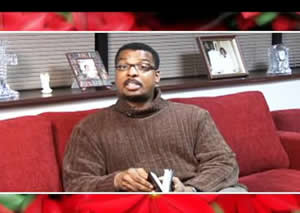 A jazz piano plays soft music. A field of holiday chrysanthemums fills the screen. A husband lounges on a red couch to send a video love letter to his estranged wife.

This is not just any public apology — it’s from Bishop Thomas W. Weeks III to his wife, national evangelist Juanita Bynum.

Weeks has posted a video to his wife on www.whatlovetaughtme.com to say he’s sorry for writing a tell-all book that uses examples from his broken marriage to teach others about relationships. 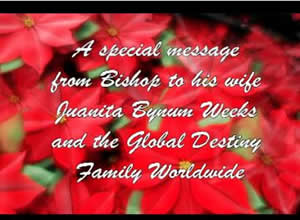 The book, “What Love Taught Me,” was coincidentally released by Global Destiny Publishing after Bynum dished about her stormy marriage to Weeks in a two-part interview in Essence magazine.

On Monday, Weeks, appeared on the Tom Joyner Morning Show to announce the debut of his book, which was selling for $13.95. It included pages detailing what Weeks said were the couple’s “weaknesses” in chapters with titles like “Opposites Attract, But Do They Last,” and “She Wanted To Be the Next Oprah at Any Cost,”

About 48 hours later, “What Love Taught Me” was yanked from distribution with this message on his website to his wife and his Global Destiny church family: “I want to speak to my wife,” Weeks pleads. “I haven’t been able to talk to her since Aug. 21, but I want to share something very personal and heartfelt. … I have wounded her emotionally in the last 48 hours. I want to say publicly, globally and privately from my heart, I’m sorry. I am pulling every book that would have been shipped.”

Weeks, an author and leader of a global ministry, promises a “full refund” to those who have ordered the book and says he will rerelease it at another date under a new title, “What Love Taught Me — Only.”

Juanita Bynum’s publicist Amy Malone said Friday that Bynum had not seen the book and didn’t press Weeks to pull it.

“She had nothing to do with it,” Malone said. “They have not spoken.”

Bynum, a Pentecostal pastor, author and gold-selling gospel singer, and Weeks have been separated since spring.

On Aug. 21, Bynum accused Weeks of beating, choking and stomping her to the ground in a hotel parking lot. He has been charged with aggravated assault, making terroristic threats and simple battery.

The couple’s divorce is pending in Gwinnett County Superior Court. A mutual restraining order prevents harassing contact between them.

However, in his video apology to his wife, Weeks thanks Bynum for sending him a “prayer shawl” and says he will be sending her a gift too — a book his father gave him that helped his spiritual life.

“My love for you still stands. I still appreciate everything you have done for me and have done for this ministry,” Weeks says in the video message. “No matter where we go in life I will always pray for you.”

Weeks has launched a four-day fast at Global Destiny in Duluth so that the congregation can pray for strength and healing for themselves and their leaders. A “Shut In” will be held Friday at 11 p.m. The sermon will be broadcast live on the Internet. In the video apology, Weeks invites Bynum to come back to the pulpit of the church they started to preach at 5 a.m. Sunday, even if it means he has to leave the building because “of the legal situation right now.”

Weeks’ divorce lawyer Randy Kessler said he was not involved in the decision to publish the book, yank it or apologize to Bynum.

“I have stayed out of that,” he said. And as far as he knows the couple is still headed for divorce even though Weeks in his video longs for the day when he and Bynum can “sit down and rejoice over dinner as family again.”

Kessler said “there is still a case pending, but if two people want to reconcile the last thing we are going to do is push divorce.