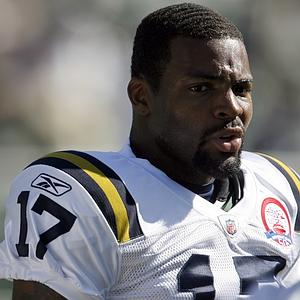 New York Jets wide receiver Braylon Edwards secretly fathered a child with “America’s Next Top Model” contestant Nik Pace — who is now suing him for up to $70,000 a month in child support.

Edwards fathered a boy with the 25-year- old beauty, who was a finalist on Tyra Banks’ show in 2005, and she gave birth to Braylon Jr. in August in Georgia.

Edwards, who makes about $5 million a year, immediately filed in Atlanta to be recognized as the father — but was shocked when Pace objected and sued for child support in New York.

Pace’s lawyer, Raoul Felder, told Page Six: “Braylon had tried to get the case litigated in Georgia because they are traditionally less generous with child support payments. It’s a cold, calculated act to pay less money.

“But we had the case dismissed in Georgia and moved [it] to New York because this is where Nik lives. We served Braylon in the past week. He can run, but he can’t hide.”

Pace is believed to have known Edwards for a few years, but they never had a serious relationship, friends say.

But Edwards insists he’s just trying to do the right thing by his child. “Nik’s main home is in Georgia, she is registered to vote in Georgia, and she gave birth in Georgia, which is why he immediately asked the courts in Georgia to recognize him as the dad,” a source said.

“She only moved to New York in November after he was traded to the Jets. He wants to be part of the child’s life, but she wouldn’t even tell him where or when the child would be born so he could be there. He wants to provide for his son. He has been paying support since the birth.”

Edwards’ lawyer, Randy Kessler, said, “Braylon is a proud father who has loved and supported his child since before he was born. He filed in June to declare himself the legal father and she objected.”