Breaking Up in a Digital Fishbowl

After a real-life rejection, the hurt can linger online, witnessed by everyone. 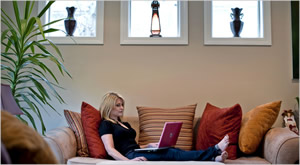 ONLINE MISERY Debora Spencer at first could not bring herself to defriend her ex-boyfriend, but finally did.

THERE is a scene in the movie “He’s Just Not That Into You” in which Mary, played by Drew Barrymore, laments the numerous technological ways she is being rebuffed by a potential beau. E-mail. Text messages. MySpace. “It’s exhausting,” she complains.

Well, Mary, it’s even worse after the relationship.

Ask Kashmir Hill, who was stung one day when she logged into a former boyfriend’s e-mail account — they had agreed to share passwords — and read a note he sent his mother explaining why he was no longer in love. The couple shared an online bank account and, for months after the breakup, Ms. Hill pored over the balance as it dwindled to $10. She cried when she finally closed the account.

“It’s enough to get rejected in real life,” said Ms. Hill, 28, who blogs about legal issues and lives in New York. “But does it have to happen so often in my online world too? It makes me 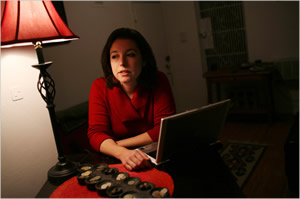 Kashmir Hill shared an online bank account with her ex, but eventually closed it.

want to keep my digital life separate in future relationships, whomever they are with.”
A new dating order has emerged in the era of social media. Couples who used to see each other’s friends only at parties now enjoy 24-hour access to their beloved’s confidants thanks to Facebook. Sharing passwords to e-mail accounts, bank accounts and photo-sharing sites is the new currency of intimacy. And courtship — however brief or intense — is wantonly scrutinized by the whole world on Twitter, Tumblr and Facebook.

As a result, the idea of what it means to break up is also being redefined. Where once a spurned lover could use scissors (literally) to cut an ex out of the picture, digital images of the smiling couple in happier days abound on the Web and are difficult to delete. Status updates and tweets have a way of wending their way back to scorned exes, thanks to the interconnectedness of social media. And breakups, awkward and drawn-out in person, are even more so online as details are parsed by the curious, their faces pressed against the digital glass.

“When you make a decision to be with a person in cyberspace you are making a commitment to their network of friends and acquaintances,” said Liz Perle, a co-founder of Common Sense Media, a nonprofit watchdog group that studies families and media. “People have so many online strings that bind them that cutting one does not sever the relationship. There are always more.”

One byproduct of the digital revolution is that trust is being assigned new meaning. According to the Internet and American Life Project at the Pew Research Center, one in five teenagers polled shares online passwords as a way to build trust and foster romance. Grown-ups, explained Lee Rainie, the project’s director, are exhibiting similar behavior. And it is not just women affected by changing rules of digital etiquette, but men too. (Several men contacted for this article declined to discuss their breakups publicly.)

Some family law practitioners say they are grappling with the complexities of online entanglements in real-world divorce.

Randall Kessler, a lawyer in Atlanta, said he advises divorcing clients to change their passwords, stop posting on social networking sites, acquire a new e-mail address, and secure or make copies of whatever is posted about them online. Users, of course, control what they post on private accounts. Where it gets tricky, though, is when photos, videos and comments have been forwarded, retweeted or reposted to friends’ accounts or on public Web sites.

“There are whole new rules of digital etiquette we are going to have to figure out,” Mr. Rainie said. “Right now, we don’t have the tools. That makes it very confusing for most people.”

Sam Altman, the chief executive of Loopt, a mobile tracking service that allows users to monitor friends’ locations using the G.P.S. software on their cellphones, said he was seeing social mores shift firsthand. About 20 percent of Loopt’s users are couples who buy the service to keep track of each other’s whereabouts. But in the past six months, there has been an increase in the number of customers who use fake locations as a decoy so a person doesn’t know where they are, Mr. Altman said, a service that Loopt offers.

He explained that some of those customers have broken up and now want privacy. At the same time, they don’t want to offend an ex by overtly letting them know they have been blocked. “People who break up always want to change their location immediately,” Mr. Altman said. At the same time, “unless it was nasty, they don’t want rush to tell everyone they’ve split up either,” he said. “Better to be cautious than hasty.”

The reason is simple: some hope the romance will be rekindled. Similarly, closing a joint bank account or switching to “single” status on your Facebook page suggests a permanent break.

Debora Spencer, a Seattle photographer, split up this summer with a longtime boyfriend with whom she lived for four years. Like many exes, she grappled with whether to remain Facebook friends. “At first I could not defriend him,” she said. “It seemed so high school. I mean, I’m 50 years old.”

Early in the relationship, Ms. Spencer’s partner had friended many of her Facebook pals so their networks overlapped. After the breakup, she still received his status updates and read comments he posted on her friends’ walls. That made her realize that he knew everything she was doing, too.

So she defriended him, hoping it would stop the flow of news.

It didn’t. One friend continued to forward her ex’s status reports and comments. Another called Ms. Spencer after seeing a photograph of her former boyfriend with another woman. “It’s not like I wanted to know this,” Ms. Spencer said. Finally, she decided to block her ex completely and asked friends to stop sending updates.

“You learn things so quickly, within minutes,” she said. “Even if we had lived together in a small town, I don’t think I would have learned half of what I did as quickly as I did on Facebook.”

Still, with any failed romance, there is always the temptation to follow up with an ex. And social networks, by design, sate hungry curiosity. Sally Che, a 25-year-old medical student at George Washington University, ended a possible romance three years ago after the man started dating a former girlfriend. (Ms. Che learned about the affair in a status update on his Facebook page.)

She hasn’t spoken to him in years and has no desire to restart their relationship. Despite that, the two remain Facebook friends. And, every now and then, and against her better judgment, she said, she trolls his page seeking fresh news. “The temptation is to look and find out what someone is up to even if it hurts,” Ms. Che said. “People who you would never talk to again are only a click away. You see where they are traveling. You check out the picture of the new girlfriend to see if he downgraded. There is this fine line between being that crazy girl who de-tags photos and gets rid of every little thing and the one who willingly continues the charade of friendship.”

“It’s hard to figure out the middle ground,” Ms. Che said. “The thing is you never really get out of the relationship.” Ms. Perle of Common Sense Media told the story of a friend, a Silicon Valley entrepreneur, who broke up recently. Her dilemma was different from Ms. Spencer’s: She wanted to sever ties with the man but not with his children. So she defriended him while remaining friends on Facebook with his children.

Still, photographs of the couple during happier days abound online. “These pictures travel,” said Ms. Perle, as she recently clicked through a Web slideshow of the couple. “You have no control once they are integrated into other people’s pages.”

In other words, she added, “you cannot de-boyfriend yourself.”