In the latest chapter of a soap opera-like saga, Chicago Bear Lance Briggs is facing a nasty legal battle that could soon turn nastier.

Brittini Tribbett, who has a 3-month-old baby with Briggs, says she’s sharing a room with their baby at her mom’s house, has turned to family for help buying diapers, and faces unpaid medical expenses and other bills — despite Briggs’ vows of support.

Tribbett, 21, says she can’t get Briggs to visit consistently with their child, and that she and the baby girl have both been hurt by his broken promises. 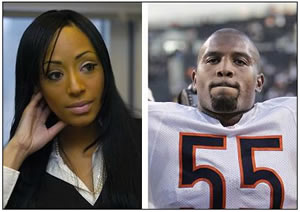 And, the college student says, their talk of building a solid family unit for their child was shattered when she learned of at least two other women now claiming to be pregnant by Briggs.

Briggs’ attorney claims the linebacker “is a gentleman who has been doing the right thing” all along. “There’s nothing he’s not doing for [the baby],” Georgia-based attorney Randall Kessler said. “I assure you that Mr. Briggs has made very generous settlement offers, but apparently there is a desire for ‘mother support,’ in addition to child support.”

Tribbett filed a paternity suit in October, and both sides said then it was an amicable legal maneuver meant to protect the interests of their child. At the time, Tribbett said, Briggs was providing her with a north suburban condo, a car and credit card for expenses.

But he later took away the car and credit card and has been painfully slow in providing them money for expenses, she said. He provided a car again and visited this weekend, after learning Tribbett had spoken with the Sun-Times, according to Tribbett’s attorney, Enrico J. Mirabelli.

Mirabelli said despite Briggs’ $7.5 million annual salary, he’s provided an average of about $250 a week over the last six months, or “maybe the cost of a tire on his Lamborghini.” He has offered, in the future, to provide “less than 10 percent of what he earns in one game,” Mirabelli said.

“There are men who make 10 times less than Lance Briggs who pay three times more than he’s offered,” Mirabelli said. “We’d expect him to pay a reasonable sum to provide the child with a lifestyle commensurate with the father’s earnings, as provided by law.”

Kessler said Briggs wants to involve an unbiased mediator to help resolve the case. But nothing can take place yet, as court records show Briggs has yet to file a formal response to the lawsuit.