The estranged husband of national evangelist Juanita Bynum on Wednesday denied that his wife was a victim of cruel treatment in a response to her divorce filing. 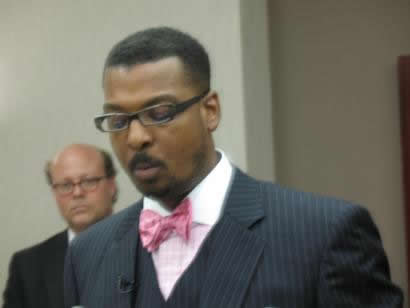 Lawyers for Bishop Thomas W. Weeks III also said their client is denying that he and Bynum have been separated, with no contact since June. The response was filed Wednesday in Gwinnett County Superior Court. Like Bynum, Weeks is seeking “relief” in the divorce â€” alimony or other support granted by the court.

“He is trying his best not to make specific requests,” said Randy Kessler, of Kessler, Schwarz & Solomiany. “He is going to take the high road.”

Bynum’s publicist Amy Malone said Wednesday the prophetess had no comment on the pending divorce.

Bynum, 48, filed her divorce petition last week in Gwinnett and was granted a mutual restraining order. She has accused her husband of beating, choking and stomping her to the ground during an alleged attack in a hotel parking lot on Aug. 21.

Weeks, 40, was charged with felony aggravated assault, felony terroristic threats and simple battery in connection to the incident.

Weeks has denied that the domestic violence occurred. He said that he and his wife have spent time together trying to work things out. But he agreed in court documents that his 2002 marriage to Bynum has been “irretrievably broken.”

Kessler said Weeks has not ruled out adding other arguments in his response to the divorce petition. Kessler has said earlier that his client also was a victim of cruel treatment during his marriage.

Next in the divorce case, which has become public since the alleged domestic incident in August, attorneys will gather a profile of marital assets and examine the couple’s debt. The couple owns property together, including the ministry they built in Duluth â€” Global Destiny Church. Weeks has asked that the debt be split equitably, but not in half.