Champ On The Ropes!

FAYETTE COUNTY, Ga. — The news hit Evander Holyfield’s neighbors like one of his left hooks. Hard. And they never saw it coming.

The community around his mansion on Evander Holyfield Highway in Fayette County was completely stunned. 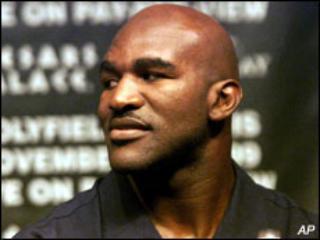 How could a world boxing champion who earned an estimated quarter billion dollars be so financially on the ropes, about to lose his $10 million home in addition to being $6,000 behind in child support?

“A lot of times, the case with high profile folks is: ‘Can you give me a break? If you can give me a month or two I’ll pay you something,'” said Randall Kessler, the attorney for Toi Irvin, the mother of one of Holyfield’s 11 children.

But Kessler said that Irvin got a call from one of the boxer’s representatives who told her that Holyfield wouldn’t be paying her any money for the foreseeable future.

“You’re getting $3,000 one month, and all of a sudden you’re getting nothing. Two months went by she said ‘I need the money,'” Kessler said. “Three thousand a month is a lot to her. It’s a lot to most people.”

According to the legal notice filed in the Fayette Daily News, the auction to sell Holyfield’s home is set for July 1, unless he can pay the $10 million to Washington Mutual Bank before then.

“I’m sure something will stop it before it goes to foreclosure,” said neighbor James Porthro, a local pastor. “He’s my friend so I wish the best for him.”

Holyfield’s Fayette County mansion sits on a pristine estate the size of a small golf course with rolling hills and glistening lakes that reflect not only the clouds floating lazily above but also the pride of the community.

“It might be the precedent setter for the value of the homes,” said Porthro. “When I moved here I moved here because I heard he was going to build here. It’s important to all of us — to the neighbors; to our economy; just to our black race period. It’s important.”

But attorney Kessler said judges are typically less concerned with property than they are with children. And Holyfield could be thrown in jail if he doesn’t pay the back child support.

“They’re less concerned with obligations for land than they are with child support,” Kessler said. “(The house) is a $10 million issue. I think he can find room in his budget to pay $6,000 to her.”