A lawyer for the mother of one of Terrell Owens’ children alleged in court papers filed Wednesday that Owens sent her “several taunting text messages … regarding his failure to pay child support.” 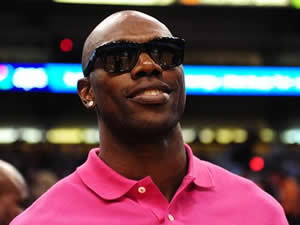 In the amendment, Kessler offers evidence of Owens’ “willful and egregious contemptuous actions, over and above the nonpayment of child support” and cites two text messages Owens sent Smith.

One of the texts cited reads: “The other mothers got a dose of reality once my attorneys and judge explained by (sic) financial situation. … so you can only imagine wht’s gonna happen when we go 2 court.”

According to the document, in May 2007 Owens was ordered to pay Smith $5,000 a month in child support. He has “failed and refused to pay any child support” for December 2011 through this month.

Last month, Owens appeared on the Dr. Phil show with Phil McGraw and said he has four children with four different women. Owens admitted he had been “irresponsible in that regard.”

During the appearance, Owens was berated by Smith and two of the other mothers. He also got a stern lecture from Dr. Phil: “You have an opportunity, because it’s not too late.”

Shortly after, amid reports that he was broke and could not afford his child support payments, Owens went on an Atlanta radio station to set the record straight: “No, I’m not broke. … My circumstances have changed. That means I don’t make the same amount of money that I used to make.”

According to the court documents filed Wednesday, Owens also called Smith to refute reports that he was broke. He allegedly said in a text message: “Not looking 4 pity, sympathy, nothing! I’ve never said I was was broke. Tht’s what the media has said. Enjoy ur day.”

The 38-year old receiver, who last played in the NFL for the Cincinnati Bengals in 2010, is currently unemployed after he was recently released by the Allen (Texas) Wranglers of the Indoor Football League, whose owner said Owens “could no longer be tolerated.”

Owens has demanded an apology from the Wranglers and $160,000, an amount Owens thinks he is owed for four game checks.

In the meantime, Owens says he is working out daily and preparing for another shot at the NFL. Earlier this week, he fired his longtime agent, Drew Rosenhaus, and hired Jason Woy, a Dallas-based agent who Owens thinks can better help him return to professional football.