Facebook CEO Mark Zuckerberg changed his status to “married” Saturday and received over one million “likes” from his followers. But the site he founded isn’t always so marriage-friendly. In fact, lawyers say the social network contributes to an increasing number of marriage breakups. 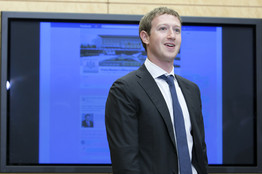 More than a third of divorce filings last year contained the word Facebook, according to a U.K. survey by Divorce Online, a legal services firm. And over 80% of U.S. divorce attorneys say they’ve seen a rise in the number of cases using social networking, according to the American Academy of Matrimonial Lawyers. “I see Facebook issues breaking up marriages all the time,” says Gary Traystman, a divorce attorney in New London, Conn. Of the 15 cases he handles per year where computer history, texts and emails are admitted as evidence, 60% exclusively involve Facebook.

“Affairs happen with a lightning speed on Facebook,” says K. Jason Krafsky, who authored the book “Facebook and Your Marriage” with his wife Kelli. In the real world, he says, office romances and out-of-town trysts can take months or even years to develop. “On Facebook,” he says, “they happen in just a few clicks.” The social network is different from most social networks or dating sites in that it both re-connects old flames and allows people to “friend” someone they may only met once in passing. “It puts temptation in the path of people who would never in a million years risk having an affair,” he says. Facebook declined to comment.

Even when extra-marital affairs develop with no help from Facebook, experts say the site provides a deceptively comfortable forum for people to let off steam about their lives and inadvertently arouse the suspicions of spouses. “The difference with Facebook is it feels safe, innocent and private,” says Randy Kessler, an Atlanta, Ga.-based lawyer and current chair of the family law section of the American Bar Association. (See Facebook and Divorce Discussed in WSJ.) “People put an enormous amount of incriminating stuff out there voluntarily.” It could be something as innocuous as a check-in at a restaurant, he says, or a photograph posted online.

When couples do end up in divorce court, lawyers say Facebook posts are used to determine alimony and child custody. Last year, a superior district court judge in Connecticut ordered a divorcing couple to hand over the passwords of their respective Facebook to the other’s lawyers. Kessler says it’s an extremely useful vehicle to gather evidence. “It helps me cross-examine a witness,” he says. Any pattern of behavior that’s recorded on Facebook relating to parenting skills, excessive partying or even disparaging remarks about a spouse that violates a court order could be admissible in court. Of course, it’s not Facebook’s fault it’s being dragged through divorce court, he says, “It’s the people who use it.”