ATLANTA — Working to resolve his financial problems, former heavyweight champion Evander Holyfield reached agreement Wednesday in a child-support case and avoided a court hearing that could have led to a call for jail time.
Randy Kessler, attorney for the mother of Holyfield’s 10-year-old son, said the boxer paid $9,000 in back child support and agreed to meet his other financial obligations within a month, including private school payments, health insurance and a college trust fund. 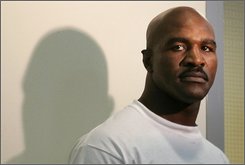 The 45-year-old Holyfield also agreed to pay some of the attorney fees for Kessler’s client, Toi Irvin. The agreement was reached before a scheduled deposition and two days before a court hearing, at which Kessler was planning to ask for jail time if Holyfield didn’t pay up.

Irvin went to court after Holyfield failed to make his scheduled $3,000 payments for May and June, apparently because of financial woes that also included the threatened foreclosure of his sprawling estate in suburban Atlanta. The only four-time heavyweight champion also missed a payment due July 1, but wrote a check for the entire amount this week, according to Kessler.

Holyfield’s luxury home, which was scheduled to be auctioned on the steps of the Fayette County courthouse July 1, was taken off the foreclosure list and is still occupied by the boxer.

The boxer and his representatives have not responded to repeated requests for comment from The Associated Press, though Holyfield told a local newspaper columnist he wasn’t broke. “I’m just not liquid,” he said in early June.

Kessler said his client personally thanked Holyfield for settling up and hoped that additional legal action would not be required.

Holyfield’s financial problems came to light when a legal notice in a small suburban newspaper said his 54,000-square-foot home — which has 109 rooms, including 17 bathrooms, three kitchens and a bowling alley — would be auctioned off because he had defaulted on a $10 million loan.

But the lender, Washington Mutual Bank, pulled the home from its auction list after an apparent settlement was reached. The bank said it was barred by privacy laws from commenting on Holyfield’s case.

Holyfield is believed to have made hundreds of millions of dollars during his 24-year boxing career, including a reported $34 million for his second bout with Mike Tyson in 1997, the infamous “Bite Fight” that ended with Tyson being disqualified for gnawing off a chunk of Holyfield’s ear.

At the time, it was the richest fight in boxing history.

Resisting repeated calls to retire, Holyfield’s earning power has been in steep decline the past few years. He went through a dismal six-fight stretch that produced only one win, prompting the state of New York to strip him of his license.

He returned from a nearly two-year layoff to land yet another title shot last October, but lost a unanimous decision to Sultan Ibragimov in Moscow for the WBO title. Still, he keeps insisting that he will fight until he’s the undisputed champion again.