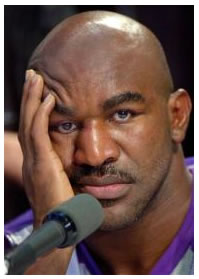 ATLANTA (AP) — Maybe now we know why former heavyweight champion Evander Holyfield wants to keep fighting at age 45. The “Real Deal” appears real broke.
His $10 million estate in suburban Atlanta is under foreclosure, the mother of one of his children is suing for unpaid child support, and a Utah consulting company has gone to court claiming the boxer failed to pay back more than a half million dollars for landscaping.

A legal notice that ran Wednesday in a small local newspaper said Holyfield’s estate will be auctioned off “at public outcry to the highest bidder for cash” at the Fayette County courthouse on July 1. The 54,000-square-foot home — located on Evander Holyfield Highway — has 109 rooms, including 17 bathrooms, three kitchens and a bowling alley.

Meanwhile, Holyfield’s handlers allegedly told the mother of one of his children that he will no longer be able to make his $3,000-a-month support payment. Toi Irvin claims the boxer has already missed two payments, so she has gone to court seeking restitution.

“My concern is there may be a lot of other mothers not be getting paid, and I would like my client to be at front of the line,” said Randy Kessler, Irvin’s attorney.

Kessler said Thursday evening he has yet to hear from Holyfield’s attorney and hopes to go before a judge in 30 days. He will request the boxer be jailed if he doesn’t pay up.

“This is such a small amount given the scope of what he has,” Kessler said. “If Evander Holyfield can get away with it, anybody can. There are guys making $15,000 a year who go to jail for missing a $100 payment.”

Holyfield, the only four-time heavyweight champion, has at least nine children.

Further compounding his financial woes, a federal lawsuit was filed about two weeks ago in Utah seeking repayment of $550,000 in loans allegedly made to Holyfield in late 2006 and early 2007 to pay for landscaping on his 235-acre estate.

The case, filed two weeks ago in U.S. District Court in Salt Lake City, said Robert Hall met Holyfield through a mutual friend and agreed to the loan, with the understanding it would be paid back, with interest, after the boxer’s next bout.

Since the initial transfer of $50,000 was made to Holyfield, he has fought four times but failed to pay back any of the loans, the suit claims. It also says he did not respond to a Sept. 10 letter demanding repayment.

Holyfield didn’t return a message left on his cellphone by The Associated Press. His attorney, Frederick Gardner, did not respond to an e-mail nor a call to his Atlanta office.

Holyfield’s apparent financial problems are a familiar story in boxing.

Joe Louis kept fighting well past his prime trying to pay off a crushing tax debt. Sugar Ray Robinson admitted he was broke by the time his long career ended. Mike Tyson has squandered most of the vast fortune he accumulated during a career that included two memorable fights with Holyfield.

Holyfield has likely made hundreds of millions of dollars during his 24-year boxing career, including a reported $34 million for his second bout with Tyson in 1997, the infamous “Bite Fight” that ended with Tyson being disqualified for gnawing off a chunk of Holyfield’s ear.

At the time, it was the richest fight in boxing history. Now, he’s defaulted on a $10 million loan to Washington Mutual Bank, which will auction off his home on the courthouse steps.

The child support case involves Holyfield 10-year-old son, whose mother was initially awarded $2,000 a month in support. A flight attendant, she lost her job when airlines downsized in the wake of the Sept. 11, attacks, prompting her to return to court seeking an increase.

But Holyfield’s earning power has been in steep decline since then. He went through a dismal six-fight stretch that produced only one win, prompting the state of New York to strip him of his license after a dismal 2004 loss to Larry Donald.

Resisting calls to retire, Holyfield returned from a nearly two-year layoff to land yet another title shot last October. He lost a unanimous decision to Sultan Ibragimov in Moscow for the WBO title, but still insisted that he would keep fighting until he’s the undisputed champion — a plan that appears downright ludicrous, even with the weak, muddled state of the heavyweight division.

Kessler said the boxer helped make a down payment on a Clayton County home for Irvin, set up a trust fund for his son and had been fairly consistent in his support p

ayments until recently, when Holyfield’s representatives told her she was being cut off.

“It wasn’t like they told her, ‘Hold on, hold your breath, we’ll get it to you, we’re just having some accounting difficulties,'” Kessler said. “It was like, ‘He’s not paying, and we don’t know if or when he’s going to pay you again.'”

Kessler said the foreclosure of Holyfield’s estate could actually be good news for his client, noting the 2003 trial uncovered evidence that the boxer had paid a $17,000 electric bill the previous December, largely because of an elaborate light display at the home.

“When people bring up foreclosure and bankruptcy, I’m not that concerned,” Kessler said. “What that does is free up money for child support. If they foreclose on his house, that means he doesn’t have to pay the mortgage. If he goes bankrupt, that frees up some other obligations.

Copyright 2008 The Associated Press. All rights reserved. This material may not be published, broadcast, rewritten or redistributed.