Former world heavyweight champ Evander Holyfield says his 109-room Georgia home is no longer up for foreclosure, after rumors surfaced last week that he faces losing the mansion. Holyfield also denies that he owes child support payments to the mother of one of his 11 children, saying she filed suit just to embarrass him. “I’m not broke. I’m just not liquid,” Holyfield tells the Atlanta Journal-Constitution. “I do feel kind of sad because things have always been positive and now everybody wants to jump on me like I’m the worst person in the world, and I went out and blew all my money.” Holyfield’s $20 million suburban Atlanta crib was set to go up for auction July 1 if full repayment of a $10 million loan wasn’t paid, records show. Along with the house debt and the cash claim by his child’s mother, Holyfield was sued for $550,000, allegedly for not paying a landscaping debt. The boxer gave no comment about the landscaping lawsuit, saying only that “everything is alright with the house now.” Says Toi Irvin’s attorney Randy Kessler: “I would’ve liked to have seen him take care of his child support obligations before worrying about his house.” Kessler says 30 days is the time frame for Holyfield’s response to the claim, before “we’ll ask that he be incarcerated.” 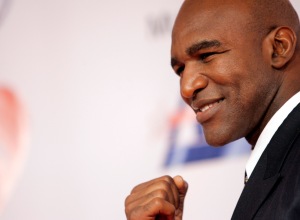