NEW YORK, (Reuters) – Here’s a sad scenario: Grandma and Grandpa pay for camp, shoes and college funds. But something goes awry; the kids’ parents decide to split, and next thing you know it’s Grandma and Grandpa who are out in the cold, writing checks but missing their grandchildren. 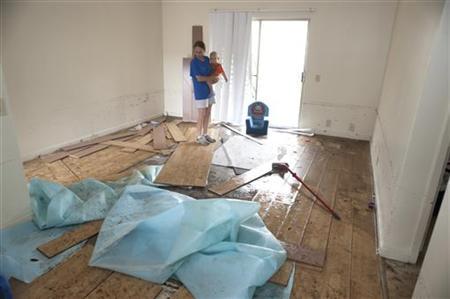 Tori Davenport holds her grandson Josias Henry while helping her daughter clean up damage in her Forest Creek apartment from the recent record setting rainfall in Pensacola, Florida, June 11, 2012. REUTERS/Michael

Think that couldn’t happen? There are at least two trends that point to more of the above. Grandparents are helping their progeny more than ever; the AARP reported that a quarter spent more than a $1,000 a year on their grandkids, with 37 percent saying that they helped cover daily living costs.

At the same time, grandparents’ rights to see and spend time with their grandchildren have become more difficult to litigate since a U.S. Supreme Court ruling in 2000, Troxel v. Granville, which struck down a Washington state law that allowed courts to order visitation rights for grandparents if they would be in the child’s “best interest.” Since then, many states have struck down their relevant laws and not rewritten them.

Consider the long-running case of Rennels versus Rennels. According to court documents, Audrey Rennels opened her northern California house to her son Roger when he divorced in 2001 with sole custody of his daughter, then a toddler. The two spent five months living with Audrey, but ultimately left the area. Three years later, Roger stopped allowing Audrey to see her granddaughter, the court documents say.

Now eight years later, Audrey Rennels, 72, has spent about $100,000 in legal fees, according to her attorney, Bruce Shapiro, of Pecos Law Group in Henderson, Nevada. The child in question is fast approaching those teen years when contacts with grandparents tend not to be very frequent anyway. The case is not yet resolved.

GETTING PULLED INTO THE DIVORCE

To be sure, the Rennels case is unusual, but the helpful-grandparents-encounter-a-divorce situation is not. Grandparents’ contributions of time and money are becoming more important to many families. One reason is that seniors are doing better than the typical young parent. In 1984, the gap in wealth between the two age groups favored seniors 10 to 1. By 2009, the ratio was 47 to 1, according to a Pew Research Center study that compared Census figures for households headed by seniors to those headed by adults under the age of thirty-five.

With the interplay of financial frailty and divorce, multi-generational families become vulnerable to fights over money with grandkids as the stakes. New York family lawyer Alton Abramowitz paints a standard picture: “You’re the parent of a stay-at-home mother and she’s divorcing a husband who works on Wall Street. He stops giving her money and says, ‘Get it from your parent.'” In this situation, Abramowitz advises lending money with a promissory note for expenses and legal fees while awaiting a judge to order support.

In other cases, he advises grandparents to help their in-laws. For example, if the grandparents’ own son is a substance abuser who isn’t working, contributing to his family or seeing his kids much, they should step up to keep the connection open. In that case, Abramowitz suggests the grandparents offer the children’s mother financial assistance, either directly or through lawyers–while asking for time with the grandchildren.

So, it’s complex. Grandparents who have been helping their progeny – or who want to start now that a divorce is looming, should make sure they structure their gifts properly. Here’s some expert advice.

Before or after a divorce, if a child or grandchild lacks necessities — money for health insurance or medical care or money to pay a nanny so the custodial parent can work –grandparents who can will step in. Tax laws allow gifts of $13,500 a year from one individual to another before gift tax limits start to kick in, so a couple of grandparents can give $27,000 to each grandchild before the gifts start to reduce the grandparents’ lifetime gift tax exemption.

Judges differ about how they evaluate that kind of financial help. A judge could count regular gifts as part of the recipient’s income. In the case of the stay-at-home mom, for example, a history of regular gifts from her parents might lead a judge to decide her estranged husband could give her less.

Beyond necessities, experts advise grandparents to direct their help towards extras: private school, hobbies, tutoring, summer camp, and family vacations, including the cost of travel for visits. For college, financial planners urge grandparents to invest in 529 college savings plans that can be held in the grandparent’s name. Wealthier grandparents can set up trusts.

Parents can get greedy or desperate. “I’ve seen parents say ‘it’ll be a $1,000 a visit’ and I’ve had grandparents pay it,” says Bloomfield Hills, Michigan, family lawyer Richard Victor, founder of the Grandparents Rights Organization, which helps grandparents with visitation battles, among other problems. Or a parent might hint about needing a new roof or car in a conversation to arrange to visit.

“It’s emotional blackmail and will escalate if you give into it,” says Abramowitz, who advises clients to offer to pay for family therapy instead.

Most of the time, visitation problems arise from dynamics other than greed or need. The estranged parents may even be trying to bond: “Sometimes the only thing that the parents can agree on is the keeping the child away from their grandparent,” says Shapiro. And judges tend not to decide complex grandparent custody cases on the basis of how much money they’ve spent.

The solution, nonetheless, may require cash. “You get more with sugar than you do with a cane,” says Atlanta family lawyer Randall Kessler, who chairs the American Bar Association Family Law Section. “Be nice to the person who has control, and that may include some financial support.”

Kessler also gets creative: When a mother objects to being parted from her children, he has suggested that grandparents invite the mother along on a family vacation as their guest, even with her current partner. “Usually they stay in a hotel down the road,” he says. More often, they turn down the offer but allow the visit.

New York family law attorney Harold Mayerson currently represents a mother who plans to ask her in-laws to buy her a local apartment where she’ll stay with their grandchildren until the youngest turns 21. Their son isn’t reliable, Mayerson says, and he suspects the grandparents will agree.

Depending on state law, grandparents may be unable to sue for visitation at all and at best, their hopes rest on a judge’s call about the child’s interests. As a rule of thumb, Kessler says, a judge might award grandparents who live close by a few hours each week and one weekend a month. It’s typical to win the right to be invited to school events, like plays and games.