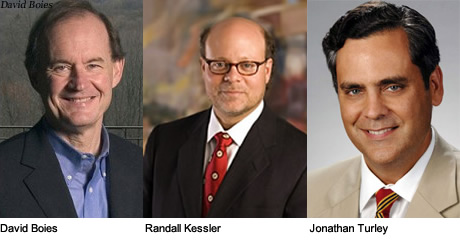 Trying a case within the crucible of the courtroom presents enough challenges for litigators, but the impact on lawyers, clients, witnesses, judges and jurors can be profound when a case attracts a significant amount of media attention.

Some of America’s leading litigators and judges shared insights on trying high-profile cases during a Nov. 21 webinar exclusively for ABA members, more than 3,000 of whom registered for the free CLE program, part of the ABA CLE Premier Speaker Series.

“The kind of scrutiny that you, your client, the case and your witnesses get from the press is very different from the kind of isolated luxury that most of us have when we’re preparing the normal case,” said David Boies, chairman of Boies, Schiller & Flexner in Armonk, N.Y. His latest clients include National Basketball Association players and the National Football League.

Boies, whose many high-profile cases throughout his career include arguing before the U.S. Supreme Court in the landmark Bush v. Gore, noted that media interest in the law and courts is much greater than it was when he began practicing in the 1960s.

“It’s not ordinarily possible simply to say ‘no comment’” to the media, he said. “And the reason for that is that somebody is going to be talking to the press, and the press will be relying to a significant extent on the spin and the biases of whoever the press’ sources are. So if you’re not out there countering what your opponent is saying, you’re often going to be in the same position you’d be in court if only one side could talk.”

U.S. District Judge Barbara Lynn of Dallas said that the attention to high-profile court cases has heightened with the 24/7 news cycle and the advent of bloggers. She said “the primary responsibility and concern” of judges is that “the attention to the media and the interest of the public in our proceedings do not interrupt a fair trial.”

That said, Lynn noted that media attention on the courts can be a good thing for public understanding of the justice system.

“There is a very important educational function that can be served by the press covering judicial proceedings in a way that hopefully brings credit to our system,” Lynn said. “With all its flaws, it’s still a remarkable and unique system. Giving the media the information it needs to do a quality job … is a good thing.”

Randall Kessler, who often represents sports and entertainment figures in his Atlanta family law practice, said that he treats the news media as a potential ally. As a frequent legal news commentator, he said lawyers perform a great service when they talk to reporters and explain the process for the benefit of readers and viewers, rather than “sit back and wait for the press to say something and then complain that the press got it wrong.”

Legal news commentator Jonathan Turley, a law professor at George Washington University who also represents high-profile clients in civil liberties and other cases, said that while the advent of news technology can seem at odds with fair courts, it actually advances the desire of America’s founders to establish an open court system.

“Technology in this area is advancing, not frustrating, the original purpose of the public trial in America,” Turley said. “That’s what the framers wanted, that’s what they put into the Constitution. So the media … offers us a really unique opportunity to fulfill what the framers could only have dreamt of—the ability not to be limited by those people who could stand in line for hours and fit into a limited number of seats [in the courtroom], but for all citizens at any given time to be able to witness the law in action.”

When asked by moderator Gene E.K. Pratter, a federal district judge in Philadelphia, what rules Boies practices by when it comes to working with media, he replied with two considerations:

Kessler said he usually counsels clients to avoid the limelight unless it’s to rebut seriously damaging information from the other side. If the client insists on communicating with the media, Kessler suggests writing and issuing a statement that the client has approved via a PDF or other secure document, to make it harder for the client’s words to be taken out of context.

When Kessler does agree to speak with the media, he often reviews ground rules with the reporter in advance—what he will talk about, and what he won’t. If he can’t comment, he doesn’t say “No comment.” Instead, he either screens his calls and doesn’t answer them, or he explains to the reporter why he can’t comment—such as in situations when the matter is private and children are involved.

If the client does have something to gain from a media appearance or interview, “Short, sweet, to the point is better,” Kessler advises. “The more you say, the more it can be used against you, just like in any good cross-examination.”

Kessler, Boies and Turley all advise lawyers to review interviews with the client in advance. As Kessler noted, “Say, ‘this is all you’re going to say and nothing further.’”

The three litigators all said they don’t use media consultants to prepare their clients for news interviews, but they do themselves counsel them on appearance basics such as what to wear, just as they would in the courtroom context.

With Turley’s clients and witnesses, it’s “not how to snazz them up, how to make them slick, but to make sure they’re believable,” he said. “Jurors are very insightful. They know when folks are acting. They know when they’re insincere. … I’d rather have a clumsy client than one who seems artificial” due to coaching from a consultant, Turley said.

Panelists pointed out that most states have bar rules that restrict lawyers’ participation in news media. Turley encountered a judge’s objection in a terrorism case when he posted public filings to his blog. He otherwise recommends that lawyers use blogs to explain the cases they’re litigating, so that reporters and bloggers can refer to them rather than contacting him directly.

Boies said that although winning at trial is the ultimate goal, some clients want success in the media, too. He advised that it’s important for lawyers to recognize that in order to maintain a good relationship with their clients.

“There are some clients in which the verdict of the court of public opinion is going to be at least as important as the verdict in court,” Boies said. “And you have to be sensitive to that, while at the same time realizing that you’re not a P.R. consultant, you’re a lawyer. And what you can do best for your client is to win the case in court. And give them some advice as to how they can contain the public inquiries or damage.”