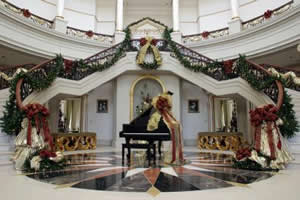 The foyer of former heavy-weight boxer Evander Holyfield’s house is decorated in gold and burgundy colors for the holiday season in this 2005 photo.

Boxing icon Evander Holyfield says he’s “not broke,” and that he’s always taken care of his children, despite reports this week that the three-time world champion’s 109-room mansion in Fairburn was in foreclosure and that he’s behind in child support payments.

“I’m not broke. I’m just not liquid,” Holyfield told the Atlanta Journal-Constitution Friday. “I do feel kind of sad because things have always been positive and now everybody wants to jump on me like I’m the worst person in the world and I went out and blew all my money.”

Holyfield appeared on the verge of losing his home, which sits on 235 acres just south of the Fulton County line, after a foreclosure notice appeared in Wednesday’s Fayette Daily News. Lien holder Washington Mutual, demanding full repayment of a $10 million loan, had scheduled an auction on July 1.

On Friday, Philip Hasty, an attorney for Shapiro & Swertfeger in Atlanta, the law firm representing Holyfield’s lending company, confirmed that the

estate is no longer up for auction. Hasty said that the change happened Thursday morning but he declined to comment further. 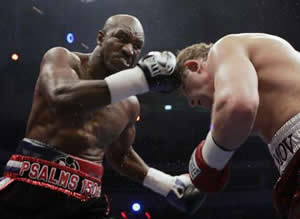 Holyfield would not elaborate on the foreclosure listing but said “everything is alright with the house now.”
Holyfield’s former accountant, Sam Gainer, who was fired by the former world champion last fall, said he had advised his client to sell the estate, or at least some of the property.

“To attack that house in any way, or suggest he get rid of it … that’s just not going to fly with him,” said Gainer, though Holyfield has not said what his plans are for the property. The manor, completed nine years ago, has an appropriately grand address: Evander Holyfield Highway. It may not have its own area code, but the estate — worth an estimated $20 million — does have a bowling alley and movie theater.

“That’s his trophy, his symbol of success,” Gainer said of the home.

But the debate over his home is not the only issue Holyfield has found himself responding to.

Holyfield, 45, also has taken out two additional mortgages totaling more than $5 million. And the mother of one of his 11 children has filed a petition for contempt in Fayette Superior Court, claiming the “Real Deal” is behind on his child support payments.

“I would’ve liked to have seen him take care of his child support obligations before worrying about his house,” said Randy Kessler, attorney for Toi Irvin, mother of 10-year-old Evan. Kessler expects a court date to be scheduled within 30 days,

“If he hasn’t made the proper arrangements by then, we’ll ask that he be incarcerated,” Kessler said.

Holyfield responded Friday to the child support claims: “Never — I would never do something like that. That’s been a consistency in my whole life. I have always taken care of my children. It’s just one of the mothers who’s saying something because she thinks it will embarrass me. I just have to roll with the punches in this situation.”

Added to that situation, Holyfield also is being sued by a Utah consulting company for failing to repay a $550,000 loan. The lawsuit, filed 16 days ago in U.S. District Court in Salt Lake City, alleges Holyfield borrowed the funds to pay for landscaping on his estate.

With the foreclosure listing, lawsuit and child support claims putting his finances in the spotlight, the obvious question would be: What happened to all the money?

His fight purses since he turned professional in 1984 have totaled roughly $248 million, including about $35 million for his 1997 rematch with Mike Tyson. Holyfield was paid $1 million last October to fight Russian Sultan Ibragimov; the former champ lost in the 12th round.

“I wasn’t aware of anything that would’ve brought things to a head (financially) like this,” said Patrick English, attorney for Main Events, which promoted most of Holyfield’s major fights. They are no longer affiliated.

English wouldn’t say what caused the split, but Holyfield has broken with many of his past associates, such as his longtime personal lawyer, Jim Thomas. They parted ways in 2003, as Thomas — like many once in Holyfield’s camp — advised the fighter he should end his boxing career.

“He doesn’t want people around him who don’t believe in what he’s doing,” Gainer said.

Holyfield still hopes to fight professionally, and he’s recently been trying to drum up interest in another rematch with Tyson, who famously bit off part of Holyfield’s ear during their second fight.

“He always felt like he’d beat that Russian guy, and then he’d get another shot at the title,” his former accountant said. “He’d tell me, ‘I’m going to become the heavyweight champion again.'”

Gainer, based in Houston, said he doesn’t think Holyfield is driven only by money.

“He’s got all kinds of obligations,” he said. “It’s no surprise he’s having financial problems.”

Sizable investments in a recording label and Christian television network — the Black Family Channel based in Atlanta — both soured. “He thinks everyone is as trustworthy as he is,” Gainer said.

“That’s the shame of it. He’s a great damn guy.