Inside the Child-Support Battles

ATLANTA – Randy Kessler’s family-law practice in Atlanta draws male celebrities as well as women in disputes with stars, which offers him a rounded perspective. 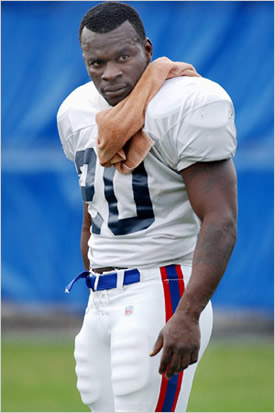 One of his clients is the former N.F.L. player Travis Henry, who has nine children, each by a different mother.

Kessler also represents the mother of one of several out-of-wedlock children fathered by the boxer Evander Holyfield, who has been married three times and has 11 children.

Another client is one of the eight mothers of the 10 or 11 children by the former N.B.A. player Jason Caffey. The exact number of children is under contention. Caffey declared bankruptcy after drifting more than $100,000 behind on payments.

“Players and others often fall into this hole because they do not believe their exes will ever come after them,” Kessler said. “Or they are so used to their own fame, they cannot believe a judge or anyone would criticize them or hold them to the same standards as average people.

“They are usually surrounded by yes men who will not tell them what they do not want to hear, like they are being a bad father.”

ATLANTA – Travis Henry was rattling off his children’s ages, which range from 3 to 11. He paused and took a breath before finishing.

This was no simple task. Henry, 30, a former N.F.L. running back who played for three teams from 2001 to 2007, has nine children — each by a different mother, some born as closely as a few months apart.

Reports of Henry’s prolific procreating, generated by child-support disputes, have highlighted how futile the N.F.L.’s attempts can be at educating its players about making wise choices. The disputes have even eclipsed the attention he received after he was indicted on charges of cocaine trafficking.

“They’ve got my blood; I’ve got to deal with it,” Henry said of fiscal responsibilities to his children. He spoke by telephone from his Denver residence, where he was under house arrest until recently for the drug matter.

Henry had just returned from Atlanta, where a judge showed little sympathy for his predicament during a hearing and declined to lower monthly payments from $3,000 for a 4-year-old son.

Three days after the telephone interview, he was jailed for falling $16,600 behind on support for a youngster in Frostproof, Fla., his hometown.

“I love all my kids,” he said in the interview, but asserted he could not afford the designated amounts, estimated at $170,000 a year by Randy Kessler, his Atlanta lawyer. Kessler said Henry was virtually broke.

“I’ve lost everything in this mess I’ve gotten myself into,” Henry said.

His eldest child was conceived while Henry was in high school, before he was named Mr. Florida Football and a Parade All-American. The child was unplanned as were all but one of his offspring, he said.

He was wed, at 19, to another of the nine mothers, who was six years older. Henry’s mother, who picked oranges for a living, disapproved.

“She was going crazy over it,” Henry said. He added that he filed for annulment within a year “for her.”

Two relationships while he attended the University of Tennessee produced two more children. Attending the annual N.F.L. rookie symposium as a 2001 draft pick of the Buffalo Bills, Henry watched a skit that dramatized the repercussions of imprudent sexual activity. It might as well have been geared toward him.

Henry laughed through the sketch. “I thought, ‘That ain’t ever going to happen to me,’ ” he said.

But it had, and it was just beginning.

Henry maintained that he was involved long-term with many of the mothers. Some, he said, told him they were using birth control, and he professed surprise at discovering they became pregnant by him.

“I did use protection at first,” he said. “Then they’d be saying they’d be on the pill. I was an idiot to trust them. Second or third time with them, I didn’t use it. Then, boom!”

In four instances, he attested, “I was trapped.” If not for his football cachet and accompanying wealth, “I guarantee you that wouldn’t have happened.”

“My counselor asks me, ‘How can you do the same thing over and over?’ ” he said, unable to provide an answer.

“Knock on wood, or something, I’m blessed not to have AIDS. That never crossed my mind.”

Henry declined to discuss aspects of his drug case. He was arrested last fall in Colorado with another man and has pleaded not guilty to charges that could net him 10 years to life in prison if convicted. The arraignment is scheduled for next month.

At the latest child-support hearing in Atlanta, Henry testified vaguely that sizable cash withdrawals were connected to his criminal matter, not to any conspicuous consumption for himself.

In an interview, Robert Wellon, the lawyer who represents the mother in Atlanta, Jameshia Beacham, characterized Henry as spending “like there was no tomorrow,” thus depriving the children of money.

The Denver Broncos gave Henry a five-year, $25 million contract in 2007. Cut last year by the team, which cited injuries and off-the-field commotion, he received only $6.7 million.

Piling on to the child-support issues, Henry failed an N.F.L. drug test. He successfully appealed, avoiding suspension, but faced another penalty from the league for what he said was missing subsequent test dates. Though Henry insisted his body has three more seasons in it, his quandary all but dooms any chance of his suiting up again.

Henry is seeking to modify child-support obligations. Some mothers and their lawyers will have none of that, saying he has squandered a small fortune on luxuries like cars and jewelry.

“I feel sorry for the guy, trust me,” Wellon said. “On the other hand, when you take those kind of actions, there are consequences. He could have taken care of the money.”

Henry argued that, within the context of richly paid athletes, he was not out of line. He contended that he owned no more than three vehicles at once and figured he had spent $250,000 on jewelry. “That ain’t a lot,” he said. Nevertheless, he was hoping to pawn some jewelry to pay off one of many debts and gain freedom.

If there were excesses, Henry said, they involved his immediate family, like picking up travel expenses to games during his seven-year career, highlighted by three 1,200-yard-plus seasons.

“I have a big heart,” he said. “I was taking care of a lot of people. I was acting like somebody who never had nothing. Could never get into that saving mode.”

Kessler, his Atlanta lawyer, said Henry could catch up on child support with access to $250,000 that the judge ordered be placed in a trust. Kessler has appealed the ruling.

“Travis is tackling this head-on,” he said, suggesting that this distinguishes him from other athletes in similar predicaments.

Henry made no excuses but said absentee fathers were part of the landscape during his developmental years. His father disappeared early on, only to resurface at the dawn of his football fame.

“There was no love lost; he wasn’t around when I needed him to be,” said Henry, who indicated that he gets along with his father.

Henry voiced no love for the mothers of some of his children. “Everything was cool,” he said before he signed the rich contract with Denver. “Then they were out for blood.”

After his drug arrest, Henry said he developed severe migraines that required a visit to an emergency room.

“I’m trying to get through the storm,” said Henry, who is eager to impart the same advice to N.F.L. rookies that he once ignored. He would tell them, “Don’t ever think it can’t happen to you.”

Back in Denver, his fiancée awaits. They set a wedding date but agreed to postpone it until the storm dissipates.

One other subject they agree on: Neither wants children.