Inside Usher and Tameka’s Marriage 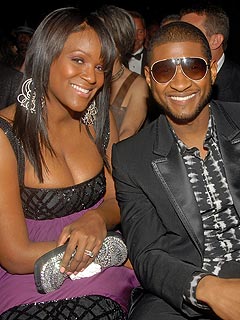 “No one I’ve spoken to is surprised,” a source close to the couple tells PEOPLE. “As bad as this is gonna sound, it was never a matter of ‘I wonder if they’ll divorce,’ but more like ‘I wonder WHEN they’ll divorce.'”

Several sources paint a picture of a troubled marriage that started unraveling even before the couple’s wedding in September 2007.

“They peaked before they even got married,” a friend of Tameka tells PEOPLE. “Right after it was over, they started to drift apart. [Usher] just wasn’t ready to settle down, at least not with her.”

The source, who tells PEOPLE that there was no third party breaking up the marriage, says that Usher still lived like a bachelor. “He just wasn’t used to calling her if he was going to be out late,” says the source. “He didn’t treat her bad. He just took her for granted.”

As the marriage continued, friends noticed that Usher and Tameka were living separate lives. “They’ve been going their own way for awhile,” says Tameka’s friend. “They don’t spend a lot of time with each other. When they were together, it was all about the boys.”

The R & B star filed the petition Friday in Superior Court in Atlanta, court records show. The couple had trouble making it to the altar, with a canceled ceremony in July 2007, followed by a civil ceremony in August and a dream wedding in September. They have two sons together, Usher Raymond V, 18 months, and Naviyd, 6 months.

Meanwhile, Foster’s lawyer Randall Kessler tells PEOPLE he and his client will respond to the divorce filing in a “timely manner,” saying, “We were hoping this case would be resolved privately, but since Usher filed it publicly we will have to respond.”