If there are courtroom fireworks to be seen in the disintegrated marriage of the daughter of late singer James Brown and her husband, they’ll have to wait for the criminal trial, when she faces charges of allegedly stabbing him the day before her father’s burial.

On Wednesday — with the custody of their children, aged 5 and 8, on the line — the feuding Yamma Brown, 34, and estranged husband, Darren Lumar, 36, went into the courtroom of Fulton County Superior Court Judge Gail Tusan and reached a temporary agreement giving them roughly equal time with the children.

There was no mention of the stabbing attack on March 9 that sent him to the hospital for 12 stitches in his arm.

There also was no mention of his wife’s attorney’s claim that Yamma Brown was just defending herself from an abusive spouse, or of Yamma Brown facing aggravated assault charges after her April indictment. 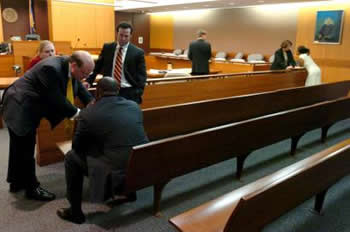 “This is not a Whitney Houston, Bobby Brown situation,” Lumar said after the agreement, referring to the tabloid fodder of those singers’ rocky marriage over the years.

“We don’t want this in the media, I don’t like the media. I am extremely happy this turned out the way it did. Our kids are safe, and that’s what matters the most.”

Lumar reiterated that he did not press charges against his wife following the alleged attack at the couple’s Tuxedo Court home in Buckhead, and he did not testify before the April grand jury. “I don’t know if I’ll be called as a witness,” he said. “But the Fulton County grand juries don’t indict people for nothing. They had witness and evidence enough to indict without my testimony.”

Yamma Brown’s criminal attorney, Renee Rockwell, who was not at the hearing, said Brown had been abused by her husband over the years. “If he gets custody of the kids, he’ll be in line for the [James Brown] inheritance.”