By SEAN GARDINER And CHRIS HERRING 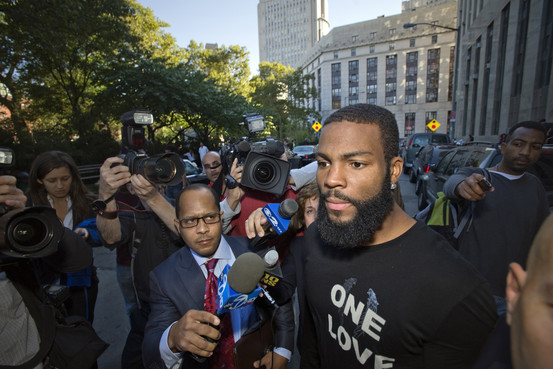 Jets wide receiver Braylon Edwards could face up to six months in jail for violating probation after being arrested in Manhattan Tuesday morning on drunken driving charges.

Police said Mr. Edwards’s 2007 Range Rover was stopped around 5 a.m. because officers believed his windows’ tint was too dark. He was arrested after a breathalyzer test allegedly registered blood-alcohol levels at nearly twice the legal limit to drive, officials said.

Mr. Edwards was released on his own recognizance about 11 hours later after being arraigned in Manhattan Criminal Court. Before being whisked into a black Cadillac Escalade outside the courthouse, he told a throng of reporters: “There will be plenty of time to talk. I’ll address everybody.” Mr. Edwards’s attorney, Peter Frankel, told reporters that the athlete was heading to Jets headquarters to talk with team officials.

It was not immediately clear what consequences the arrest would have on the 27-year-old’s immediate and long-term football future.

Mr. Edwards currently is on probation in connection with a fight he was involved in outside a Cleveland nightclub last October. The 6-foot-3-inch, 215-pound Mr. Edwards was arrested on misdemeanor assault charges after punching club promoter Edward Givens, a 5-foot-7-inch, 135-pound friend of NBA star LeBron James. He was traded from the Cleveland Browns to the Jets two days after the incident.

In January, Mr. Edwards pleaded no contest to misdemeanor aggravated disorderly conduct. A Cleveland judge suspended a 180-day jail sentence and instead placed Mr. Edwards on 18 months’ probation and fined him $1,000.

Andrea Taylor, spokeswoman for the City of Cleveland’s Prosecutors Office, said part of the terms of probation required that Mr. Edwards not commit any criminal offenses for the entirety of his probation period. “As far as we’re concerned the new DUI charge should be a violation of his probation,” she said, adding that the city’s Probation Department, whose officials declined to comment for this article, must make that determination. Should his probation be revoked, Ms. Taylor said, Mr. Edwards could be forced to serve the 180-day sentence, she said. Mr. Edwards’s criminal attorney in that case, Pat D’Angelo, did not return a call seeking comment.

An NFL official with knowledge of the situation said it appears, at this point, that Mr. Edwards’s alleged offense falls under the league’s “substance-abuse policy.” If a player is convicted or admits to such an offense, the first offense calls for a fine of up to $50,000 but no suspension. One caveat: The league keeps violators of this policy confidential, so if Mr. Edwards has been found to be in violation of the substance-abuse policy in the past, he would be suspended for a second violation.

On Monday night, Mr. Edwards attended teammate Jerricho Cotchery’s third annual fund-raiser auction/dinner/poker tournament for the Cotchery Foundation at the Hudson Terrace nightclub on West 46th Street. But Maryjane Kevlin, a spokeswoman for that club, said Mr. Edwards had only “half a beverage” at the charity event before leaving prior to 9:30 p.m.

Mr. Edwards was pulled over by a marked police cruiser on the northbound side of 12th Avenue near 34th Street. Uniformed officers stopped Mr. Edwards because they suspected the tints on the windows of his 2007 Land Rover were too dark, police said. New York Police Department spokesman Paul Browne said officers reported smelling alcohol on Mr. Edwards’s breath and asked him to submit to a breathalyzer test.

According to a law-enforcement official with knowledge of the case, Mr. Edwards first blew into a portable breathalyzer device outside his car and registered an 0.15. He took another test on a fixed machine at the police precinct later and registered a 0.16, twice the legal limit to drive, the official said.

Prosecutor Alyssa Gunther said that prior to taking the tests, Mr. Edwards acknowledged he’d “had a couple of drinks,” debated if the police stop was proper and then tried to reach a compromise, offering to “just take a cab and go home.” Her request bail be set at $2,000 was denied and Mr. Edwards was released on his own recognizance.

An unidentified man and woman and two Jets teammates, D’Brickashaw Ferguson and Vernon Gholston, were in Mr. Edwards’s SUV at the time of the traffic stop, a law-enforcement official said, one of whom was allowed to drive the SUV home.

Jets General Manager Mike Tannenbaum said the team is “very disappointed in Braylon’s actions this morning.” He said team officials “are reviewing the information with the league and will impose the appropriate disciplinary measures.”

In addition to his criminal cases in New York and Cleveland, Mr. Edwards was sued for child support last December by Nik Pace, the mother of his infant son and a former contestant on the television show “America’s Next Top Model.” Randy Kessler, Mr. Edwards’s attorney in that case, would not comment other than to say, “I know they are trying to work things out.”

In two games this year, Mr. Edwards has caught a total of six passes for 54 yards, including a touchdown pass on Sunday. After the score, Mr. Edwards taunted a defensive player and the team was penalized 15 yards on the ensuing kickoff.