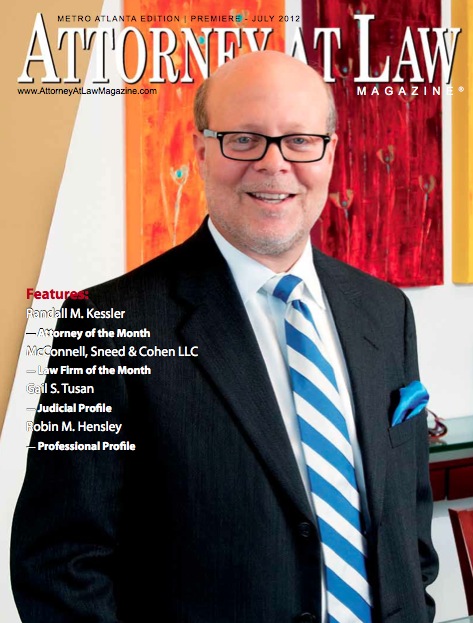 Gentle Strength
Randall M. Kessler is humble, personable and incredibly down to earth. It’s not until he begins to reveal the distinguished tenor of his professional notoriety, that his unassuming nature becomes more conspicuous.

As founder of family law firm Kessler & Solomiany, he’s had great success; especially when it comes to attracting media attention. He has represented numerous entertainers, athletes, actors, musicians, public figures, and high net worth individuals. His unassuming image is often captured by the eager lenses of press and paparazzi as he accompanies celebrity clients to court as well as to sporting games and events. 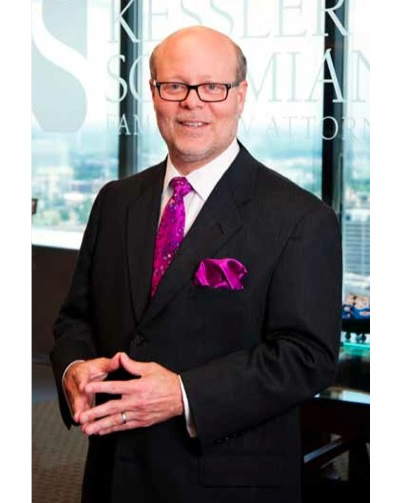 Perhaps the most intriguing part, however, occurs afterward when Kessler relays the story with the same humility and tone that would be expected of a mere bystander. The celebrated family law attorney attributes his prosperity to good luck and timing. Kessler narrowed his firm to deal with family law exclusively in the late 80’s; just as divorce attorneys were becoming less stigmatized. Kessler feels content with explaining his dramatic ascendancy in family law via this happy circumstance.

“Back then there was a stigma to being a divorce lawyer. It was such a bad thing,” he said. “Now people realize divorce lawyers really do help people through a hard time and to prepare for their future.”

A valid point; however not all family law attorneys can claim to have had their talking mug captured by studio cameras and most certainly have not had the privilege of rubbing shoulders with such a range of personalities, including recording artists T.I. and Christina Milian, as well as athletes such as Terrell Owens, Andre Rison and Lance Briggs.

Dealing with celebrities and their spouses and partners is hardly glitz and glamour according to Kessler however.

“We try to treat them all the same, but the scheduling is very hard,” Kessler said. “Parenting time arrangements are tricky because we have to work around a concert schedule or football season. The NFL doesn’t take a break the same time school does.”

Kessler said that another aspect tied in with the phenomenon of handling high-profile litigation is a lack of access to your client. He said this can hinder communication and if allowed to go too far, the entire case as well.

“There are a lot more third parties involved with celebrities. If dad’s playing football, you have to work it out so that grandma comes in to help,” Kessler said. “You want to make sure you have a relationship with your client, but to communicate through a third party, that gets tricky. You both just have to be convinced that the third party is accurately communicating what the client wants.”

According to his calculations, roughly ten percent of the celebrity cases Kessler gets involved with are public.

“We had a jury trial against Holyfield,” Kessler said when asked of a case that stuck out in his mind. He had a change in child support.

“The truth is I’m across street from CNN,” he said. “They know I’m reliable and I’ll be wearing a suit.”

He said he was thankful for the opportunity to appear on reputable news programs because they are a high pressure exercise in thinking on your feet.

He added that perhaps the hardest part about being on TV was learning how to think in sound bites. Kessler likens it to presenting in front of a judge but more challenging.

“There are a thousand things I could say,” he said. “But I’ve got to narrow it down to what’s relevant, simple, understandable.”

Family law was always at the forefront of his mind, but Kessler dabbled in more generalized law at first.

“When I started, I handled family law cases,” Kessler said. “But if someone needed help with a DUI, workers compensation, or personal injury case, I did that too.”

As soon as he was able however, he made the full switch to his chosen concentration. “With family law, you play a big part in helping to shape the future in a positive way,” he said. “It’s a very empowering feeling.”

Kessler was young when he launched his own firm. He decided it was a good time to do it since he was a young, single man at the time with nothing tying him down.

“I went from getting business because people thought I was

young and hungry to people giving me business because they thought I was good at it,” he mused about his early years. “After two or three years I started only taking family law cases.”

Kessler said he had already had some experience in family law, and was pretty good at it.

“I felt like I was making more of a difference in an immediate way,” he said. “People were troubled, like all clients are, but there was a fix to it. I think it’s much better than a criminal case where you’re dealing with a crime, and there are not two parties that will continue to see each other.”

Matters of the Heart

There are challenges at times to dealing with something so potentially emotionally charged as a family law firm. Kessler said one of the hardest things is deciphering what’s best for the clients and the children.

“The kids go unrepresented, but I can’t in good conscience pursue a goal that’s harmful for kids,” he said. “Ultimately it’s their life, but I work really hard with my clients on their goals.”

The family law attorney’s affinity for giving back doesn’t end at the office, however.

Kessler is an active bar leader; having served the bar in many ways, including chairing the family law sections of the American Bar Association, the State Bar of Georgia and the Atlanta Bar Association. In this capacity, he said he helps his clients, but he strives to help other lawyers help their own clients as well.

Kessler lectures regularly at Continuing Legal Education Seminars, but perhaps his most rewarding lawyer activity, is as a law school professor. He has taught a Family Law course at Atlanta’s John Marshall Law School for the past decade. Although the added workload was a bit daunting, Kessler said he feels it is all worth it on those particularly enjoyable occasions when he sees former students in court.

“It is always refreshing to see them flourishing,” he said.

When Kessler begins talking about his own family, the lawyer reveals his ultimate soft-spot. He and his wife Valerie have been together 20 years, and married six. He and Valerie met one night at a friend’s party. He thought she reminded him of his first girlfriend.

“There are thousands of good parents out there and I was just one that they happened to hear of,” Kessler said of the honor. “I love the heck out of my daughter Jolie. She’s five; she travels everywhere with us.”

Therein lies the essence of Kessler’s success some might say. The family law attorney is a favored, go-to voice of authority with the media, and a popular choice among high-profile, red- carpet runners. However, ultimately what it comes down to is an inherent affinity he harbors for family.

“The greatest rewards are that I get to see people down the road,” he said. “Sometimes years later, I’ll run into a client at a park, ballgame, or the shopping mall. It’s good to see them back to normalcy.”