ATLANTA (AP) — Lawyers for the estranged husband of televangelist Juanita Bynum have been trying to get her side of the story for four months, but they say she keeps postponing her appointment.

Last month, Bynum was ordered by a Gwinnett County Superior Court judge to appear for a deposition on Monday. 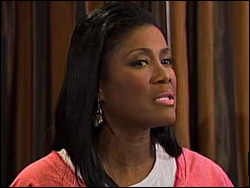 The order, filed Jan. 8, read, “It has now been three months, nine letters, multiple telephone calls and at least one thousand dollars to attempt to schedule Plaintiff’s deposition.”

In one of the letters, dated Dec. 14, attorney Monica Hanrahan tells Bynum’s divorce lawyer, Karla Walker, “Clearly the Court wants to keep the case moving forward, as do we. We understand Dr. Bynum-Weeks is an in demand speaker, but we certainly hope this case is a priority for her.”

Three days later, Hanrahan writes, “While we would much prefer to agree on a date cooperatively, we can not wait indefinitely for Dr. Bynum-Weeks’ response.”

On Jan. 2, Hanrahan wrote in her final letter before filing a motion with the court, “I am under a good amount of pressure to get Dr. Bynum-Weeks’ deposition scheduled … We want about 4 or 5 hours of her time, in a case which she filed…I trust you are doing your best to get us a date, but perhaps a motion is necessary to convey to Dr. Bynum-Weeks how serious we are about getting this on the calendar.”

The attorneys for Thomas Weeks III waited until 3 p.m. on Monday for her to show up.

“Judges like lawyers to figure out things like depositions without the Court’s help,” Randy Kessler, one of the attorneys representing Weeks in the divorce case, said on Monday. “We’ll still be optimistic, we’ll still keep the door open. We’ve got all next week available. We’re not going to be the ones to blame if it doesn’t happen.”

Weeks said in a statement released on Monday afternoon, “We need to hear Ms. Bynum’s position directly from her, under oath. There has been much said in the press, and much of it by her public relations’ personnel. Today was to be the day that we heard directly from her.”

Kessler said he plans to again ask the court to compel her to appear at a later date and compensate his client for legal fees.

Bynum filed for divorce from Weeks on Sept. 27, citing “cruel treatment” and saying the marriage was “irretrievably broken” about a month after he was accused of attacking her in a hotel parking lot. Weeks is facing criminal charges related to the alleged incident.

According to a police report, Bynum told officers that on Aug. 22, Weeks “choked her, pushed her down, kicked and stomped her … until a bellman pulled him off of her.”

Weeks has pleaded not guilty to charges of aggravated assault and making terroristic threats.

The couple wed in a million-dollar, televised ceremony in 2002.

Messages left with Walker at her office in Valdosta and Bynum’s publicist, Amy Malone in Los Angeles, were not immediately returned.