Lawyers clean up from tornado

By Meredith Hobbs
Several downtown law offices were damaged by Friday night’s tornado and quite a few more were affected by snarled-up traffic Monday, when many downtown streets remained closed during the morning commute.

The Equitable Building at 100 Peachtree St., which houses a number of law firms, was hit hard.

At The Bloom Law Firm, on the 21st floor of the 35-floor building, the tornado blew out windows in one office as well as a wall between the floor’s main hallway and an expansion space under construction.|

Two attorneys at the firm, Simon H. Bloom and Stephanie E. Dyer, returned to the building Friday night from a client event just a few minutes after the tornado had hit.

“We rolled in just as the tornado rolled out,” said Bloom. “It looked like a war zone. The streets were littered with glass, scrap metal, computer monitors and detritus.”

The two had returned to the building so that Dyer could pick up her car. Because glass covered the street, she got out of Bloom’s car a few blocks away and walked down Peachtree Street toward the building. “Glass was falling, creating about two inches of debris and broken glass. The police were yelling at people to get off the sidewalks and walk in the middle of the street so they wouldn’t get hit by broken glass,” she said.

As Dyer reached the building’s lobby, word spread that a second tornado might hit—just as the Atlanta Hawks game was letting out at Philips Arena a few blocks away. Dyer said she told the security guard they needed to evacuate the building and get everyone in the basement.

She and others nearby—including two small boys who’d been to the Hawks game with their mother—took refuge in the basement for more than an hour, where Dyer started a game of hangman on a dry-erase board to keep the boys’ minds off the tornado.

When she finally made it up to her firm’s offices, Dyer said, she had to remove sheetrock and metal from the collapsed hallway wall to get in the door. But once inside, she was “pleasantly surprised that there was not too much damage,” she said. “There was a window out in the office of one attorney who had just received document production, so there were papers everywhere.”

Other offices in the building were hit harder. “There were about 250 windows blown out and some floors were completely demolished,” said Bloom.

Dyer, who is the firm’s managing partner, said she learned from building management that the wind lifted ceiling tiles in some offices when it blew in, raining down dust and debris and sucking papers into the ceiling.

Dyer said most people at her five-lawyer firm worked from home Monday while she and a couple of her staff put the office back together.

“I’ve been dealing with contractors and insurance people all morning,” she said, adding that the plan is for everyone to be in the office Tuesday.

Several other law firms in the Equitable Building did not answer the phone Monday.

Up the block at 191 Peachtree St., law firm denizens could see the damage at the Westin Peachtree Plaza from their windows, but their building was spared.

The biggest problem was the traffic, said Miechia Gulley, a legal secretary at Molden Holley, whose offices are at 191 Peachtree. Her commute from Gwinnett County, ordinarily 30 minutes, stretched to 90 minutes on Monday morning—and that was just to get to the intersection of West Peachtree and 18th streets, where she parks at John Marshall Law School and takes MARTA downtown.

The tornado hit the Atlanta Legal Aid Society’s low-lying offices at 151 Spring St., breaking the office window of Steven Gottlieb, the group’s executive director, and that of a third-floor stairwell, which both face Spring Street.

The three-story building, which dates to the 1920s, was otherwise undamaged, said Angie Tacker, Legal Aid’s communications director. “There is some benefit to being in an old beat-up building,” she noted.

Tacker said screenings for people seeking legal help with tornado damage were canceled for Monday but will be held Tuesday. “Our screening lady’s house and car got hit,” she explained.

The State Bar of Georgia’s headquarters at 104 Marietta St. were unscathed, except for a shattered window in the parking deck, said building engineer Steve Hallstrom.

Across the street, at Centennial Tower, the tornado broke windows in the exterior building skin but did not penetrate past the second, interior layer, said Randall M. Kessler of the family law firm Kessler, Schwarz & Solomiany, which is on the building’s 35th floor.

“It looks worse than it is,” he said. “The hardest thing has been the fear factor for clients. A lot of people have canceled and rescheduled.” 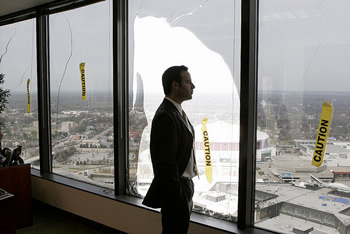 Kessler worked from home Monday but said that some of his employees who tried to get to work were thwarted by the traffic and the widespread street closures. He said a paralegal who commutes an hour from Flowery Branch spent three hours getting to work—only to give up half a block from the building because the streets were closed off, and she could not find anywhere to park.

Two floors down at 101 Marietta St., Jenifer Schuster, a paralegal at Pate & Brody, said the only damage at her firm was a cracked exterior window.

But she said her typically 20-minute commute from Virginia-Highland took 90 minutes Monday morning. Although she could not park in her building because the street was blocked off, she was able to park at the CNN Center—for free.