As American families become more blended due to the country’s 50% divorce rate, the lines can become fuzzy when it comes to money and finances.

“One of the biggest challenges to a second marriage is stepchildren,” says Mackey McNeill, founder, president, and CEO of Mackey Advisors. Stepchildren can add financial and emotional complications to a relationship, especially for the stepparent. These obligations may not end when the stepchild turns 18, as more of today’s parents are supporting their children into adulthood. 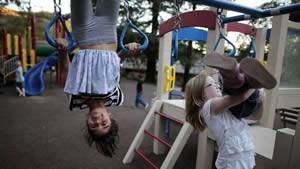 More than 4 in 10 American adults have a stepparent, a step or half sibling or a stepchild, according to the Pew Research Center, and the 2000 U.S. Census showed 4.4 million stepchildren in the country. For someone starting or already in a relationship with a partner who has children, questions about finances become even more complicated.

“It’s absolutely important if you are dating someone who has children or if you have children, you have to bring up the topic of money,” advises Suzanna de Baca, vice president of wealth strategies at Ameriprise Financial. After a while, issues like who pays for a child when eating out or on vacation, which typically isn’t outlined in a divorce decree, can become an issue if the couple doesn’t discuss finances. “Divorce decrees lay things out in a general sense, but how that plays out in reality could be different,” she says.

When couples decide to marry, experts agree that conversations about finances should take top priority–even more so when children are involved. When one person has children from a prior relationship, “define whether the children are part of the whole financial mix,” says de Baca. “If you marry someone with children, it’s absolutely a financial responsibility you’re taking on.”

Understand the financial picture before getting married. “People will inevitably argue about money,” says Paul Golden, manager of marketing and communications at the National Endowment for Financial Education. “Getting married intensifies this especially when there are children.” To help ease any tension, Golden recommends being open and honest about financial situations, credit history, accounts, debts, assets, retirement funds, and any financial obligations from a previous relationship that may include alimony and child support. “Don’t be shy, especially if your partner has children,” he adds.

Be sure to ask any questions about a partner’s child support and alimony payments. “It’s better to know ahead of time all the possibilities than to find out afterwards,” says Randy Kessler, founding partner of Kessler & Solomiany, LLC. If there are outstanding questions, he suggests talking to a divorce lawyer for an hour to help understand a partner’s financial responsibilities towards children and a former spouse and if there are any financial obligations that you may incur as a result of getting married. “Stepparents do not have an obligation to pay child support except in extreme circumstances like custody changes where the stepparent becomes a virtual parent who takes on the obligations of a parent and then later becomes only a visiting parent, for example,” Kessler adds. “If the stepparent adopts the child, they could be obligated to pay child support if the marriage doesn’t work out. As a child cannot be a party to a prenuptial agreement, you cannot establish child support in a prenuptial agreement.”

Know your limits. “You have to talk about where the line is and what you’re comfortable doing,” says certified financial planner Deana Arnett. “There are some people who have a tough time financially committing to children who aren’t their own.” For example, if your partner loses their job and can’t make child support payments, you can pay their child support or let their ex take them to court for not making payments. “Are you going to bail your partner out?” she says.

“Child support is a court order,” says Kessler. “If someone doesn’t pay, they can be sent to jail or forced to pay their ex’s attorney fees. If the judge sends the parent to jail, that parent will be in jail until they pay or the judge becomes convinced they can’t pay.” Although a judge can’t make a stepparent pay child support, “they can pressure the parent to pay,” says Kessler.

Communicate. Set regular meetings for financial discussions. These conversations aren’t necessary if you’ve been dating for a few months but once your lives become intertwined–and absolutely before getting married–experts recommend talking about money and household budgets.

“Bring up issues so you’re clear about your feelings about money,” says de Baca. “Have a mutual plan to give some sort of framework on a go-forward basis.”

If your partner divorced because of issues surrounding money, they have to be mature and talk about these topics for the sake of their children. “If you really can’t talk about money, a mediator might be helpful to facilitate a conversation between your partner and their ex,” says McNeill. “Then, talk to your stepchildren about what you’re going to do. If you can’t afford something, don’t be afraid to say, ‘No, we don’t have the financial resources.’”

Oftentimes, children will ask their parent’s significant other for money or to take them shopping. It’s important to talk about this with your partner, asking something like, “Your child asked me for this, how do you want me to handle this?” de Baca recommends.

Set boundaries. “Know your limits with what you’re willing to spend on stepchildren,” says McNeill. “Be clear and talk about it because this issue can get very touchy. State your boundaries so you don’t become resentful.”

If you don’t want to spend retirement assets on a child’s education, for example, then make that clear. “Retirement savings are separate but the retirement plans are a joint plan, and say that these are our retirement moneys together,” says McNeill.

Saying “no” can be very difficult, and the conversation can get very touchy and emotional at times. To help ease emotions, McNeill suggests beginning a conversation with, “My intention at the end of this conversation is that love be present.”

Budgets can also get more complicated when it involves an ex, making planning even more important. “When you deal with stepfamily finances, not only are you dealing with your own finances but you’re dealing with the finances to a degree of the ex’s house as well,” says Arnett. “There’s some financial intertwining from child support payments to dance classes to braces.”

Conversations with a partner’s ex-spouse can help you understand where money should come from for certain purchases. “If you’ve thought about these issues in advance, it takes some of the reaction out of making financial decisions,” says de Baca.

As people may have different values towards money, some parents may not foot their financial obligations towards their child. “Decide whether you want to compensate for the other parent if they don’t have the same resources or aren’t responsible with money,” says McNeill. If you decide not to pay for the portion that a parent doesn’t pay, help create a plan for your stepchild to fund this other half by working or borrowing money. “Help them think through it,” McNeill says. “You’ll do them a real service because they’ll have to deal with these decisions later in life and you’ll set clear boundaries for yourself.”