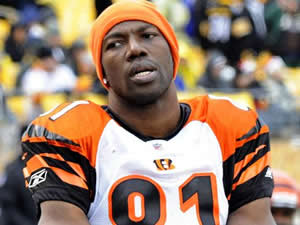 Days ago, it was revealed the free agent wideout, 37, is recovering from ACL surgery. Now his character may require some rehab after the mother of his child claimed he’s not fulfilling his financial obligations.

T.O. “has failed and refused to pay the full amount of child support for June 2011,” attorney Randall Kessler wrote in a court paper filed in Fulton County (Atlanta) Superior Court earlier this month seeking to hold Owens in contempt.

“She simply asks that he follow the order to which he agreed,” Kessler said of the court-ordered payments which date to May, 2007. “Rather than discussing his situation with her or her lawyers first, he simply cut his child support.”

Owens’ camp has been mum. He earned $2 million plus incentives from the Cincinnati Bengals in 2010, his 15th NFL season.