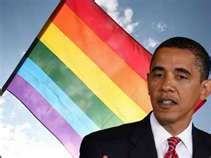 This is a watershed moment. It will affect thousands and maybe hundreds of thousands of lives. Perhaps soon there will be no such thing as “gay” marriage and it will return to simply “marriage”, which may be between same sex individuals or different sex individuals. Years ago the debate was “interracial” marriage, but today, when a black person and white person marry, it is simply called “marriage”. They do not sign forms and indicate they have an “interracial” marriage. They are simply…married. That looks like what is on it’s way for “same sex” or “gay” marriage. Barack Obama’s statement (see CNN article) and what impact it could have, who knows. But it is a step. In a nutshell, here is what he said: “I’ve just concluded that for me personally it is important for me to go ahead and affirm that I think same sex couples should be able to get married.”

Of course, leaving such a decision to the states sounds like the old republican refrain (states’ rights) but on this issue, the last republican president sought a national plan. It certainly makes for interesting politics and it seems, like with many other issues of our, and our predecessors’ times, that society is moving ahead of the law. Same sex marriage is becoming more widely accepted and the law is following, albeit not everywhere (such as North Carolina).

Still the legal issues remain complicated and interesting. How do you resolve custody disputes between two gay men? How do you divide property, assets, real estate between a gay couple who separates? We can clog up our court system and make them file a separate lawsuit for each issue, or we could allow them to divorce, and to make use of the system already in place for heterosexual couples who break up, and that is the divorce process.