Quick Getaways, at the Divorce Hotel

THE American marriage, it seems, is on the rocks. The common line — true or not — is that half of all marriages in this country end in divorce.

So here comes a plucky entrepreneur from, of all places, the Netherlands, with a wild, you’ve-got-to-be-joking plan to profit from the sorry state of so many American unions.

It’s called Divorce Hotel, and the idea is this: Check in on Friday, married. Then, with the help of mediators and independent lawyers, check out on Sunday, divorce papers in hand, all for a flat fee.

And — why not? — toss in some reality TV for good measure. 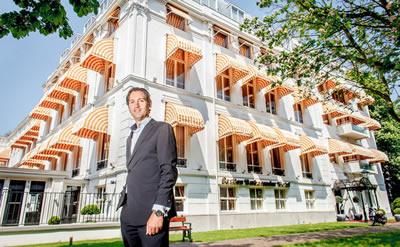 Jim Halfens, a Dutch entrepreneur, wants to introduce “Divorce Hotel,” a weekend program for couples seeking a speedy split-up, to the United States.

Unusual as it sounds, the Divorce Hotel concept is up and running in the Netherlands, where its mastermind, Jim Halfens, is helping unhappy marrieds divorce en suite. Seventeen couples have tried it so far. All but one left divorce-ready.

Now Mr. Halfens, 33, wants to take the idea to the United States. He is negotiating with hotels in several cities, including New York and Los Angeles, as well as with law firms and, yes, two television production companies — for a reality show.

American divorce lawyers roll their eyes. Sure, “Divorce Hotel” sounds catchy. But most breakups are too complicated — or, frankly, too acrimonious — to be worked out in a cozy hotel room somewhere.

Robert S. Cohen, the lawyer who helped guide Mayor Michael R. Bloomberg, Christie Brinkley, Ivana Trump and other A-listers to splitsville, says he wishes he’d thought of the idea. It’s a great gimmick, he says — but as a practical matter, he adds, it probably wouldn’t work for most couples, let alone for the well-heeled types he advises.

It might if a couple were still friends and their financial arrangements were straightforward, he says. But in his view, it’s unlikely to work for complicated cases involving, say, significant property or business holdings, complex stock options or offshore accounts that must be traced or assessed.

“The notion of being able to — at the beginning of a split-up — spend a weekend putting these various pieces together and coming to a solution to them would be virtually impossible,” Mr. Cohen says. “I don’t see how one would do it and come up with a fair result.”

He notes that divorce proceedings are often a highly emotional time for couples. “And the notion they’re now going to spend two days with each other at some fancy hotel seems to me not to be a very likely scenario,” he says. “Most people getting divorced don’t want to see each other again except when they have to.”

Mr. Cohen would be the first to tell you that divorce is big business these days. In the United States alone, estimates of what might be called the divorce industry range from $50 billion to $175 billion a year, depending on what costs are included. (Lawyers, after all, are only the beginning.) More than 1.2 million people in the United States filed for divorce in 2009, the most recent year for which data are available, according to the National Center for State Courts.

MR. HALFENS came up with the idea for Divorce Hotel after watching a college friend go through a painful divorce.

“He was losing weight, he was unable to have fun in life anymore and they were fighting every time you saw them — it was horrible,” Mr. Halfens says of his friend. The divorce negotiations dragged on for five months, he says — not all that long, by American standards.

“I was convinced there has to be another way,” Mr. Halfens says.

So, drawing on a background in marketing, as well as a stint at a law firm, he opened Divorce Hotel. And, by the way, it isn’t just a single hotel. Mr. Halfens has struck agreements with six high-end hotels in the Netherlands, most of which are reluctant to be seen as the Divorce Hotel, or even to divulge that they participate in the program.

Couples stay in separate rooms. A suite is used for mediation talks. Hotel staff members receive special instructions — and are told that these are no ordinary guests. “You don’t want the hotel crew wishing you a very nice weekend and hoping you have lots of fun here,” says Mr. Halfens, who evaluates couples first, to enhance the odds of success.

Divorce Hotel charges a flat fee of $3,500 to $10,000, depending on the complexity of a couple’s financial arrangements. Divorces in the United States tend to cost $5,000 to $20,000, though the cost can soar depending on the assets involved, the case’s complexity and, perhaps most crucially, whether child custody is an issue, according to Randall M. Kessler, chairman of the American Bar Association’s family law section.

Child custody battles and cases involving complex financial arrangements, such as self-owned businesses and stock options, tend to be the costliest, he says, with fees often exceeding $100,000 from each party.

Once the couple check out, they need only show the papers to a judge to have their divorce made final. Of course, marriage laws vary from state to state, which is why Mr. Halfens is in talks with law firms and hotels in different states.

LAST September, a 44-year-old computer consultant in the Netherlands checked into a Divorce Hotel with his wife. He spoke on the condition that his full name not be used, to protect their privacy.

Both had been through divorces before. The first time, he says, he lost the equivalent of $30,000 just on lawyer and court costs. The process took a year.

“There was a lot of fighting — not by us, but our lawyers,” he recalls. “Every letter her attorney wrote had to be answered by mine. That financially ruined me.”

He and his second wife wanted to end their seven-year marriage on friendly terms. “We were both divorced before and we both experienced a lot of pain and misery,” he says.

So they opted for the Divorce Hotel — and were thrilled with the results. On his divorce weekend, he says, they went out on the town for dinner and wine. “It wasn’t weird or wrong,” he says, “We felt great — like friends.”

Mr. Halfens tells the story of one couple who got along so well during the weekend talks that the mediator wondered whether they would reconcile. “They were so positive that they went to the beach together,” he says. Ultimately, though, they pressed on with the divorce. Another time, a couple shared their final night together in the hotel’s honeymoon suite.

“We were a bit flabbergasted,” Mr. Halfens says. That couple, too, ended up divorcing.

Mr. Halfens has big plans for Divorce Hotel. He’s written a book, due out next year, and says that in addition to the hotels in the United States, he has talked to hotels in Britain, Italy and Germany about hosting his program.

Under his agreements with the two American production companies, Base Productions and A. Smith & Company, some couples would be followed and filmed as they go through Divorce Hotel.

Mickey Stern, co-chief executive of Base Productions, says he jumped at the chance to produce a show around Divorce Hotel. “These are real people getting real divorces — or at least attempting to get real divorces — and it has all of the human drama of this significant process all condensed down into a very short period of time,” Mr. Stern says. Given the number of people who get divorces in the United States — and the possibility for some TV fireworks — the audience could be huge, he says.

“Divorce Hotel is as real as it gets,” he says. “If there’s a conflict, it’s real because the stakes are real.” He says he expects the show to have its debut this fall, although he declined to name the network.

TELEVISION aside, could Divorce Hotel really work here? Mr. Cohen, the divorce lawyer, says the courts are so backed up with cases that people are moving toward mediation and arbitration to end marriages, at least when huge sums of money or child custody are not at stake.

But, like Mr. Cohen, Jason Marks, a divorce lawyer in Miami, says complex cases cannot be resolved in a weekend. And some people may do all sorts of things when a marriage runs into trouble: hide money, undervalue assets, perpetrate fraud.

“That happens all the time,” Mr. Marks says. It takes time — and expensive lawyers — to sort it all out.

Mr. Halfens concedes that only one of every three couples that apply for his program is accepted. His team tries to ensure that both parties want to divorce and are willing to work with a mediator. If the couple is bickering or barely speaking to each other, or if greed or vengeance seems to be a motivation, the couple is rejected.

Mr. Halfens, who is not married, has already invited Demi Moore and Ashton Kutcher to Divorce Hotel, he says. They’re a perfect fit, in his view, since they’ve indicated they want to end their six-year marriage on friendly terms.

He hasn’t heard back.