US R&B singer Usher has filed for divorce from his wife, less than two years after they were married.

The 30-year-old, whose full name is Usher Raymond IV, filed the petition in a court in Atlanta, Georgia. No reason was given for the split.

The star and Tameka Foster Raymond, 38, got married in a private ceremony in August 2007. 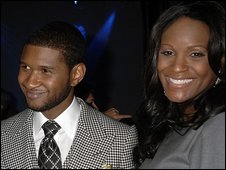 Ms Foster Raymond, who was Usher’s former stylist, has three children from a previous marriage.

They wed six days after calling off their original ceremony hours before it was due to take place.

That came amid reports that Ms Foster Raymond, who was pregnant at the time, has been taken to hospital for stress.

Lawyer Randy Kessler, who is representing Ms Foster Raymond, told Associated Press his client was a “faithful wife and loving mother” but declined to comment on the singer’s conduct during the marriage.

An initial hearing on the case has been scheduled for 15 July.