They appeared to be a match made in heaven, but toward the end not even prayer could keep them together.

The stormy marriage of national evangelist Juanita Bynum and Bishop Thomas W. Weeks III, temporarily calmed by a night of passion, was dissolved Friday in a Gwinnett County courtroom. 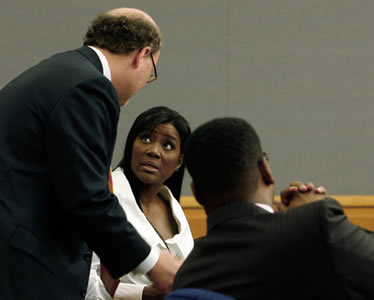 Both Bynum and Weeks expressed relief and a measure of joy that their marriage, marked by an elaborate televised wedding, a high-profile ministry and a parking lot beat down, was over.

Bynum filed for divorce in September. On Friday, about a month shy of her sixth wedding anniversary to Weeks, Bynum said she was at peace with the divorce. “It’s not a sad thing,” she said. “It has been a long awaited moment.”

The traveling minister wore a casual cotton top, khaki pants and a sweater tied around her waist. She smiled broadly soon after her ties to Weeks were severed.

Weeks, on a three year-probation for assaulting Bynum last summer also appeared to be happy. He wore a grin, a bow tie and a brown pen-striped suit. He said he will always have a “special love” for Bynum, but he is moving on.

For some tense minutes Friday, it appeared that the divorce would be derailed.

Superior Court Judge Debra Turner asked Bynum if she had been intimate with Weeks since they separated. She seemed surprised at Bynum’s answer:

Turner grew concerned about moving ahead “My understanding is you can no longer have marital relations based on the date of separation that you file,” she said. Bynum said in court that she and Weeks separated in May.

The judge called for a recess so Weeks’ attorney Randy Kessler could check case law . Kessler argued before the break that the sexual interlude shouldn’t halt the process. “She filed for divorce after that sexual encounter,” he said. “They have been living in a bonafide state of separation.”

Bynum did not say whether that rendez-vous occurred before or after Weeks pushed, kicked and beat her in the parking lot of the Renaissance Concourse Hotel on Aug. 21. During the break from proceedings, Bynum and Weeks stared down at their instant messaging devices . Bynum was typing feverishly. Weeks was reading and scrolling through a message. When Bynum finished her note, she slid the device into her purse, flung her hair with attitude and stared off at a corner. Weeks continued to read on and then gazed up at the ceiling sighing. It is unknown whether the couple was communicating with each other. When asked, Weeks would not answer the question.

The divorce was finalized at 10:46 a.m. after Turner and Kessler agreed to change the couple’s separation date to September, the month Bynum filed.

According to a 14-page settlement agreement, neither party will receive alimony. They have divided all bank accounts and will retain ownership of the debt and individual assets they had before marriage. Bynum also asked for some sentimental antiques she collected seven years ago, including a harp and a sculpture of a woman. Weeks gets the couple’s 2004 Land Rover, his international ministry and the church the couple started together in Duluth, Global Destiny.

Bynum said doesn’t have time to waste on moping. She said she has been hired as a regular adviser on “Divorce Court,” and two weeks ago, was permanently added to the cast of “Lincoln Heights,” an ABC network series She still continues herministry.

Weeks said he will focus on building his church and “healing” his broken heart. “You have to deal with the trauma,” he said. “I didn’t marry her to be here today.”