ATLANTA (AP) — A judge on Tuesday ordered rapper T.I. to pay more child support to the mother of two of his children after she claimed he wasn’t providing enough money.
Superior Court Judge Bensonetta Tipton Lane told the two-time Grammy winner, whose real name is Clifford Harris, to pay just over $3,000 a month to LaShon Dixon. He had been paying about $2,000 per month. 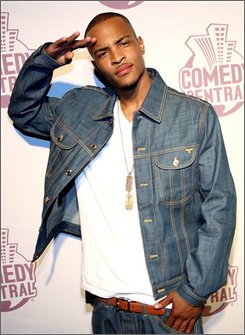 The judge also said the 27-year-old performer must continue to pay for the boys to attend private school, uninsured medical bills and expenses related to the children’s extracurricular activities.

Tipton Lane also awarded the couple on Tuesday joint custody of the boys, ages 7 and 8. Dixon, 28, was granted primary physical custody. The children previously spent about 40 percent of their time with the rapper.

Dixon’s attorney, Randy Kessler, said his client is still unsatisfied with the amount the judge ordered T.I. to pay but is happy to receive more child support.

Every little bit helps,” Kessler said. “She was just getting by with the children, while they lived a different life with their father. It can’t be complete opposites on the other side.”

An e-mail to one of T.I.’s lawyers was not immediately returned Tuesday.

He also has two sons with his fiancee, Tameka “Tiny” Cottle, of the defunct R&B group Xscape.