In May, former NFL (and now IFL) wide receiver Terrell Owens appeared on Dr. Phil with three of his — in Dr. Phil’s words — baby mamas. Shortly after the show, Owens told an Atlanta radio station that, despite professional setbacks and bad investments, he’s not broke. (This contradicts remarks he made earlier this year when he said he had nearly blown through his $80 million in career earnings.) 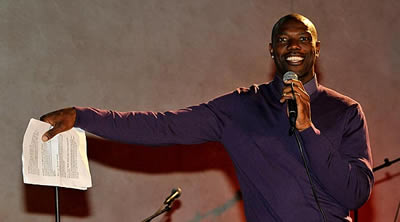 Still, T.O. conceded that his “circumstances have changed.” And those circumstances could change again — into jail time — if he doesn’t start making his child-support payments. According to Atlanta’s WSB-TV, Owens is $20,000 behind on his child-support payments to Melanie Smith, the mother of their seven-year-old daughter. Smith says that Owens previously agreed to pay $5,000 a month.

“It’s a tragedy, not only that we are here today. This is the third case she has had to file in the last year,” Smith’s attorney Randy Kessler told WSB.

Owens’ attorney David Hartin took responsibility for his client’s absence blaming poor communication. The trial has been rescheduled for July 19 and if T.O. is again a no-show he could face time behind bars.

Too bad the hearing wasn’t in California; Yahoo.com’s Doug Farrar caught up with Owens Wednesday at a ribbon-cutting ceremony for Performance Gaines, an NFL workout center started by trainer Travelle Gaines and former NFL player Hank Baskett. And although he didn’t speak about his finances, T.O. did speak about his hopes of returning to the NFL, as well as his relationship with Cowboys owner Jerry Jones, who said recently that Owens “could help someone” (though that someone doesn’t appear to be located in Dallas).

“Jerry’s a great guy,” Owens said via the Dallas Morning News. “Obviously, he gave me an opportunity in 2006, and I had a great three years there with the Cowboys. That’s the type of guy Jerry is. It goes beyond just the football relationship. I think he’s done that not only with myself, he’s done that with a number of his players. You think about the Troys, the Emmitts the Michaels, Charles Haley. These relationships continue to go on even when football stops. So I think that’s what’s most notable and admirable about Jerry.”

As for a return to the NFL, Owens, 38, reiterated that he’s willing to do whatever it takes.

“My numbers speak for themselves,” he added. “It’s not a matter of performance, I think everyone saw that my last year in Cincinnati. Once I get on the field I play football. Everything else is out the window.”

First things first: He should plan on showing up in court next week.