THE BYNUM-WEEKS MARRIAGE IS OVER

The six-year marriage of prophetess Juanita Bynum and Bishop Thomas Weeks is now officially over. 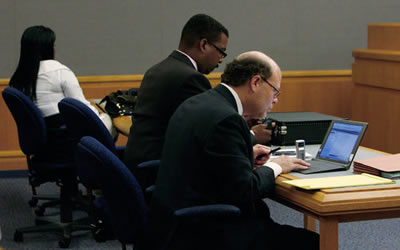 The proceedings were stopped at one point when Bynum revealed the two had sex after their separation.

What’s not known is if the couple had sex after the now infamous assault by Weeks on Bymum. The judge in the case, Debra Turner, left the courtroom to research whether the divorce could be granted under Georgia law, which, in part, sees sex by separated couples as a act of reconciliation.

“My understanding is you can no longer have marital relations based on the date of separation that you file,” Turner said.

However, Randy Kessler, Weeks’ attorney, said that the couple had been living in separation and that Bynum filed for divorce after the sexual encounter.

“The fact that they had sex before she filed for divorce is an amendable defect,” said Kessler, meaning the conjugal coupling should not void the divorce.

Later, after a recesss, Judge Turner agreed to push the date of separation up to September to circumvent the reconciliation issue.

According to the Atlanta Journal-Constitution, Bynum, who arrived just before 10 am, said “I’m doing well, I feel great. It’s not a sad thing.”
She also told the news outlet that she doesn’t have any time to take off and heal from the divorce. She has been made a regular adviser on television’s “Divorce Court,” and two weeks ago, she was permanently added to the cast of “Lincoln Heights,” an ABC network series featuring multicultural families. The prime time show airs on Mondays.

Bynum filed for divorce last September, one month after Weeks assaulted her in an Alanta hotel parking lot. Weeks plead guilty to assault and is serving three years’ probation.

In their settlement, Weeks has been ordered to immediately return several household items — including artwork and silverware — to Bynum, and she’s agreed to pay $40k of Weeks’ attorney fees. He also gets to keep his 2004 Land Rover. Neither side gets alimony.

The two were married in an over the top ceremony in 2002, and have toured the country lecturing on love and relationships.