The national women’s publication is running a two-part interview with Bynum in which the pastor talks about her relationship with Weeks. She describes several other accounts of alleged abuse she faced during their marriage. The first part of the interview hit news stands last week. 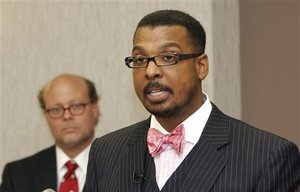 “Anyone who knows the truth about our marriage, knows what is in that magazine is a bunch of conjectures, misstatements, and dramatized events,” Weeks said in a statement released after a press conference at his church Wednesday.

Weeks said the interview made him look like a “villian” and that he is looking forward to being “vindicated” in the court system.

Bynum has accused Weeks of choking, beating and stomping her to the ground during an Aug. 21 attack in an Atlanta hotel parking lot. The pastor discusses the details of the incident in the magazine article.

Weeks has been charged with aggravated assault, terroristic threats and simple battery in connection with the incident. He later denied the account of abuse.

I look forward to the mountain of evidence that will clear me at the upcoming trial,” Weeks said. “I am extremely disappointed that my wife, who swore to me, before she asked me to marry her, that she would never publicly embarrass me, that she would never let me fail, or see me suffer. I believed her.”

Weeks and Bynum moved to metro Atlanta two years ago to start a ministry, Global Destiny Church in Duluth. They later separated amid financial troubles and were evicted from their $2.5 million home in a country club community.

Their divorce is still pending in Gwinnett County Superior Court.