Will I Have to Take on My Ex’s Debt? 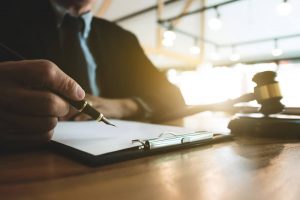 In a divorce proceeding, you and your spouse must divide the assets and the debts you accrued in your marriage. Different states divide debts differently, but in Georgia, the couple’s debts are subject to equitable distribution. A question our clients often ask is whether they’ll have to take on their ex’s debt. In this post, we’ll answer some common questions about Georgia’s laws and procedures surrounding marital debt.

Types of Property in Divorce Proceedings

Before we can discuss how debt allocation works in Georgia, we need to distinguish the two different types of debt in divorce proceedings.

Marital debt is any debt a couple takes on during their marriage. If the couple takes on the debt to purchase a physical item, such as a house or car, that item is considered marital property, and so is the debt.

Non-marital debt generally refers to debt that one spouse took on before the marriage. Some debts might be “non-marital” even if the person’s obligations began during the marriage. For example, if the partner had been paying the debt from a separate personal fund, even though they were married, the debt may be “non-marital.” 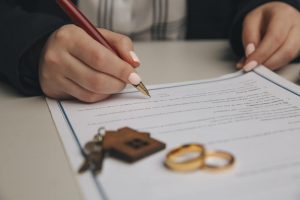 Marital debt is a form of property. Because that is true, debt gets divided similarly to how a couple or judge might divide the couple’s assets.

Two competing doctrines in the US dictate how a couple or judge might divide debts. Some states follow a “community property” doctrine, where each partner holds responsibility for half of the debt acquired in the marriage. Georgia, however, follows the “equitable distribution” doctrine, where the focus is on fairness rather than ensuring an even split.

To achieve equitable distribution, a couple might try to reach a mutual agreement about the debts they each retain. A judge can resolve disputes if negotiations are not fruitful, and the judge has the final say about who must pay what debt. Courts may consider factors such as:

Any ruling on a marital debt does not sever someone’s liability to a creditor. Lenders and creditors do not care who pays what portion of debt if both partners’ names are still on a loan or purchase. Even if the court assigned a marital debt to only one spouse, creditors could still demand payment from you if your ex cannot make payments.

The best way to protect yourself is to pay off as much debt as possible before initiating divorce proceedings. While you should work with your lawyer to remove your name from jointly held accounts like credit cards, this step only protects you from future liability, and you may still be liable for at least a share of the debt accrued before your divorce.

As with any other assets, spouses cannot hide debt from each other in divorce proceedings. If your ex took on debt during the marriage without telling you, and the debt is discovered during the divorce, the court could still deem it marital debt, and you may still be liable to pay at least a portion of it.

The Atlanta divorce lawyers of Kessler & Solomiany, LLC can help you protect your personal assets, navigate potential debt liabilities, and ensure that your rights are protected while you’re getting a divorce. Call us at (404) 688-8810 for a consultation with one of our divorce lawyers.